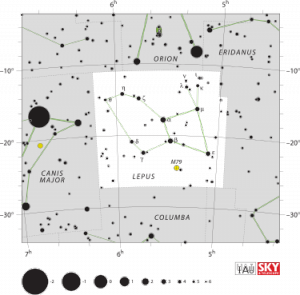 Lepus is a constellation lying just south of the celestial equator, immediately south of Orion. Its name is Latin for hare. Although the hare does not represent any particular figure in Greek mythology, Lepus was one of the 48 constellations listed by the 2nd century astronomer Ptolemy, and it remains one of the 88 modern constellations. It is located below the constellation Orion (the hunter), and is sometimes represented as a hare being chased by Orion or, alternatively, by Orion's hunting dogs.This constellation should not be confused with Lupus, the wolf. 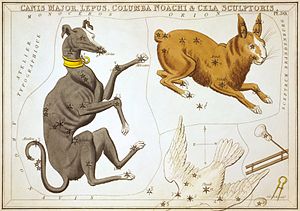 Lepus as seen in Urania's Mirror(1825)Lepus is most often represented as a rabbit being hunted by Orion, whose hunting dogs (Canis Major and Canis Minor) pursue it. The constellation is also associated with some lunar mythology, including the Moon rabbit. Four stars of this constellation (α, β, γ, δ Lep) form a quadrilateral and are known as ‘Arsh al-Jawzā', "the Throne of Jawzā'" or Kursiyy al-Jawzā' al-Mu'akhkhar, "the Hindmost Chair of Jawzā'" and al-Nihāl, "the Camels Quenching Their Thirst" in Arabic.