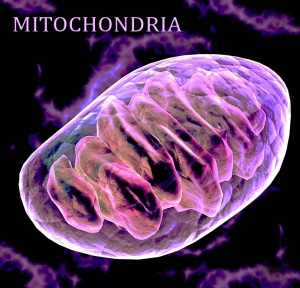 Mitochondrial DNA is only a small portion of the DNA in a cell; most of the DNA can be found in the cell nucleus. In most species on earth, including human beings, Mitochondrial DNA is inherited solely from the mother. Mitochondria have their own genetic material, and the mechanism to manufacture their own RNAs and new proteins. This process is called protein biosynthesis. Protein biosynthesis refers to the process whereby biological cells generate new sets of proteins.

Without properly functioning Mitochondrial DNA, humanity cannot effectively generate new proteins for DNA synthesis. Nor store the levels of ATP required to generate the light from the cell to embody our spiritual consciousness. Thus, through the Mitochondrial DNA damage humanity is grossly addicted to consuming everything in the external world to fill this energy void within our cells. (See NAA Alien set up for Addiction)

Because we have known nothing else in our recent history and have erased memories, humanity is unaware that we have existed with severely dysfunctional Mitochondrion.

This is a direct result of the Mother’s DNA, magnetic principles and proton structure extracted from this earth and a synthetic alien version of “Dark Mother” that was put into the planetary architecture to mimic its functions. Humanity has been without its true Mother principle functioning on the planet and evidently this is recorded in the cells of our Mitochondrial DNA. This event has been described many times as the NAA invasion of Planetary Logos through controlling the magnetosphere and magnetic field.[1]

When we equate the gender principle inherent in our creation and that our Mother principle is returning energetic balance into the earth core through the magnetic field, the next step is the implication to repair the Mitochondrial DNA. Mitochondrial DNA is the DNA located in mitochondria, structures within cells that convert chemical energy from food into a form that cells can use, adenosine triphosphate (ATP). ATP measures the amount of light quotient held by the cell and tissues of the body and is directly related to the embodiment of spiritual consciousness (Soul Matrix and Monad), which is energy and critical for energy metabolism.

The inner mitochondrial membrane is sorted into numerous cristae, which expand the surface area of the inner mitochondrial membrane, enhancing its ability to produce ATP. It is this area of the Mitochondrion, once functioning properly, that increases the ATP energy and generates light into the cells and tissues of the body. The cristae higher function in the mitochondrion is being activated in the ascending groups beginning in this cycle. Synchronically, the name “cristae” has been given through scientific discovery when its direct implication is related to the activation of the crystal gene.

Mitochondrial diseases are from genetic mutations imprinted into the DNA sequences. Artificial architecture placed into the planet, such as alien machinery, with intention to make genetic modification to usurp the Mother’s DNA, manifested DNA mutation and DNA damage to all species. Mitochondrial diseases take on unique characteristics of blocked energy in the body because of the way the disease accumulated through inherited maternal genetics in ancestral bloodlines. Mitochondrion is critical for every day cell function and energy metabolism which also leads to spiritual progression of soul and oversoul (monad) embodiment. Mitochondrial disease reduces effective overall energy production for the available body-consciousness energy, stunting human development and spiritual growth. Thus, the body ages and gets diseases faster; the personal energy is deactivated thus depleted. This severely limits the amount of usable energy available for the brain development and all neurological system functions.

Kundalini Stages of Die Off

Apoptosis is word of Greek origin, meaning "falling off or dropping off." Apoptosis is controlled programmed cell death which is directly related to the mitochondrial instruction set of the cell. Cell death plays a considerable role during physiological processes of multicellular organisms, particularly during embryogenesis and metamorphosis from kundalini spiritual activation. The key player in switching into this die-off mode is the mitochondria of our cells. In fact we must look to mitochondria as being the chief orchestrator of the entire Kundalini alchemy process of spritual ascension. Mitochondria play a central role in apoptosis (cell die off) by amplifying and mediating extrinsic apoptotic pathways, and in the integration and propagation of death signals originating from inside the cell such as DNA damage, oxidative stress, starvation. Apoptosis is most often induced through the disruption of the mitochondrial inner transmembrane potential and through a sudden increase in the permeability of the inner mitochondrial membrane. This causes an influx of water by osmosis into the mitochondria with the eventual rupture of the outer mitochondrial membrane, resulting in the release of pro-apoptotic proteins from the mitochondrial intermembrane space into the cytoplasm. This toxic die off is commonly felt during the detoxifying stage and effects of kundalini activation and Dark Night of the Soul. [3]

Mainstream science tells us that the main source of energy in the human body is from what we consume as nutrients that are converted in the Mitochondria and then stored as ATP molecules in the cells. More accurately, the multidimensional consciousness bodies are the main source of energy current in the cells of human bodily tissues, and when a human being chooses to develop their spiritual bodies, they gain increasing access to higher potential forms of spiritual energy and consciousness intelligence inside their physical body. For example, the Soul, Monadic and Avatar consciousness bodies store accumulated light energy in the ATP molecules throughout the cells of the physical body, when they are embodied. When the spiritual body is not active in the physical body, this results in mitochondrial dysfunction and cell death. The accretion and absorption of more light and energy into the cellular matrix and tissues of the physical body, is a function of Expanding Consciousness that occurs through the embodiment of higher spiritual layers. [4]

The Crystal Core Activation is a planetary initiation that ignites an individual’s spiritual body into a catalytic process which activates the liquid crystal cells, both in the Mitochondrial cristae, and within the diamond Crystal Heart which contains the Permanent Seed Atom.[5]

The Holy Mother through the Mother Arc Hubs, created within the Arc of the Covenant gateway, intends to reclaim the genetic bonds to heal her offspring incarnated within the lower creation worlds. This is also about correcting the Mother to Child RNA-DNA records within the divine blueprint of humanity, extracting Black Lilith archetypes and aligning the corrected Mitochondria and chromosomal bonds to the Holy Mother’s eternal flame, that is held deep within the Sacred Crystal Heart. The Mother Arc Aquamarine gateway has been initiated into its next stages of dissolving the NAA’s Patriarchal Domination Coding network and its Alien Dark Mother constructs that have infected the planet earth, and this lunar architecture has been tracked from the Wesa Fallen System.[6]