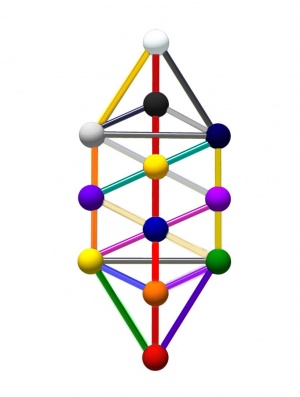 All matter forms and forms of consciousness, including planetary bodies and human bodies, are manifested through these morphogenetic (form-holding) imprints. The architecture of that manifestation template is the 12 Tree Grid. These exist as a quantity of crystalline (that's why it's also called a crystal body), energetic substance that is composed of specific patterns of frequency. The universe is one massive field of consciousness embracing and containing all other forms where all experiences of reality and manifestation takes place. Layers upon layers of morphogenetic fields exist at every level form has manifested at each dimensional plane in the Universal Tree of Life.

… our personal blueprint (i.e. morphogenetic field) is known as our personal morphogenetic field, and it expands to exist at a planetary level, the Galactic level, The Universal Level and Multi-verse levels. All of the levels of the manifestation templates, the Personal, Planetary, Galactic and Universal 12 Tree Grids are nested together interconnected as what manifest within our holographic reality.[1]

Morphogenetic Fields are comprised of templates of conscious light and sound which serve as the blueprints on which matter and conscious identity will then manifest. This occurs at a microcosmic and macrocosmic levels of the Core Manifestation Template and is a part of the mechanics of all creation.

All matter forms and forms of consciousness, including the layers that make up planetary bodies and human bodies, are manifested through these morphogenetic, form-holding imprints of the core manifestation template or the 12 Tree Grid. They exist as a quantity of crystalline energetic substance that is composed of specific patterns in arrangements of frequency. The morphogenetic fields are instruction sets, they direct the movement of energy in the Scalar Wave points to form in certain ways, so that we perceive the holographic reality within that frequency band that our consciousness body is actually stationed within. The instruction sets contain intelligent energy that relays that quality of information to our consciousness, in which we can perceive that information directly or translate that information through sensory ability. [2]

The purpose of knowing about the instruction sets, is in knowing that our higher consciousness, the inner light of Christos, can activate and begin to transmit trinity wave formats into the planet's morphogenetic field patterns, and this shifts the reality into trinitized formats, that further build the Triad Communication Stations..[3]

Planet and Human DNA are One

Morphogenetic fields are a layered part of the “consciousness” architecture of the planet, which include the entire DNA and collective energy of humanities mental and emotional body. Those collective mental and emotional energies are responsible for what the entire planet manifests as its experiences and mirrors it to the whole. This is the microcosm relationship to the macrocosm, they are one and the same. This reinforces and influences, belief systems, ego identity roles and every psycho-social and cultural system existing on the planet today.

So when it is discussed that the planetary “architecture” and DNA has been hijacked by alien forces, it means also that the mental archetypes and emotional symbols that many humans have been using as a belief system to identify with as an ego identity, are actually dissonant to the metaphysical nature and harmful to the life force and inner spirit.[4]