Musica Universalis (literally universal music), also called Music of the Spheres or Harmony of the Spheres, is an ancient philosophical concept that regards proportions in the movements of celestial bodies—the Sun, Moon, and planets—as a form of musica (the Medieval Latin term for music). This "music" is not usually thought to be literally audible, but a harmonic, mathematical or religious concept. The idea continued to appeal to thinkers about music until the end of the Renaissance, influencing scholars of many kinds, including humanists. Further scientific exploration has determined specific proportions in some orbital motion, described as orbital resonance.

The discovery of the precise relation between the pitch of the musical note and the length of the string that produces it is attributed to Pythagoras. The Music of the Spheres incorporates the metaphysical principle that mathematical relationships express qualities or "tones" of energy which manifest in numbers, visual angles, shapes and sounds – all connected within a pattern of proportion. Pythagoras first identified that the pitch of a musical note is in inverse proportion to the length of the string that produces it, and that intervals between harmonious sound frequencies form simple numerical ratios.In a theory known as the Harmony of the Spheres, Pythagoras proposed that the Sun, Moon and planets all emit their own unique hum based on their orbital revolution, and that the quality of life on Earth reflects the tenor of celestial sounds which are physically imperceptible to the human ear. Subsequently, Plato described astronomy and music as "twinned" studies of sensual recognition: astronomy for the eyes, music for the ears, and both requiring knowledge of numerical proportions.[1] 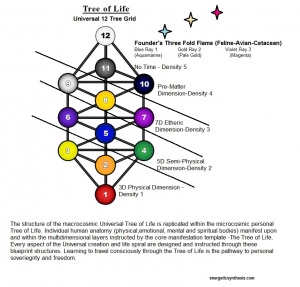 The macrocosmic structure of the Universal Tree of Life is replicated within the microcosmic structure of the personal tree of life, as the Musica Universalis, the Music of the Spheres which act as the harmonic structure that organizes the spherical vibration of multiple spectrums of frequency.[2][3] The Music of the Spheres incorporates the metaphysical principle that mathematical relationships express qualities or tones of energy which manifest in numbers, visual angles, shapes and sounds, that are all connected within a pattern of proportion.Thus, we may become attuned to see these patterns of movement as energy in action in the multidimensional realities that are represented in our model of the Universal Time Matrix, as these massive sentient fields of co-creative Collective Consciousness that are journeying throughout time, space and dimension.[4]