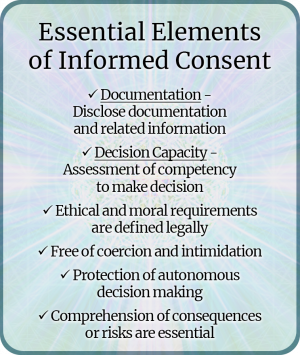 Informed Consent is a legal term and ethical principle that describes biological ethics, which was introduced after World War II. It replaced the earlier medical attitudes that were founded on having implicit trust in a doctor’s decisions, and put patients in charge of their own care. Informed Consent is the process for getting permission before involving that person in some kind of situation that impacts bodily health or wellbeing, usually related to medical research or clinical experiments, such as being informed of the potential risks of a therapy or drug, and giving informed consent before being provided with it. Informed consent can be said to be given, when a person has been educated to understand the facts and considers the implication and possible consequences of an action, which will impact them. Therefore the term informed consent is an ethical and legal principle in which a person exercises their right to gather more data for analysis and perform their own due diligence, to better understand the facts and consequences of making a choice that impacts them. Informed consent is directly related to preserving a human beings right to self-ownership, autonomy and the prevention of abusive conduct.

However, a person may verbally agree to something from fear, perceived social pressure, or psychological difficulty in expressing true feelings. A person may claim to understand the implications of some action, but in fact has failed to understand the possible consequences fully. A legally defined valid informed consent has three components; disclosure of the information in a truthful way to make an autonomous decision, the mental capacity to comprehend the information and form reasonable judgments on the consequences, and the voluntary action to exercise decisions without external pressures such as coercion, manipulation and deception. These three core principles of informed consent are important to understand as they correlate to the tipping point that must be reached for the human Collective Consciousness to be awakened into the thresholds of accepting the higher frequency reality. As more people can comprehend their personal rights in Universal Law, they can exert that personal power to become more flexible and open to receive the clarity around the larger unpleasant truth behind world events. As they begin to perceive more of the true nature of reality pushing past denial and fear, they rise to support the collective human demands for full disclosure, demanding to know the truth no matter how ugly it is. When people go beyond fear and denial, and stand up for the ethical treatment of humanity and the earth, they are willing to accept responsibility, petitioning for the truth to be known as based in Universal Laws. And this directly applies to examining evidence and continually asking for Informed Consent in everything that impacts our mind, body and spirit, and in our world.

Informed consent was implemented into the medical system when the scientific research conducted in Nazi Germany was discovered, and contained some of the worst human rights abuses and crimes made against humanity. This is an important distinction, to connect the creation of the informed consent culture in our society, to the actions behind the Nazi Black Sun agendas. This timeline is when the silent weapons for quiet wars was declared in collaboration, with some of the off planet breakaways and the extradimensional parasites. The same Controller factions are busy destroying informed consent in every way possible today and distracting the masses to ignore its deeper meaning, which is to serve and protect personal autonomy. The Nuremberg code was established in 1949, for the purpose of developing standards by which to judge the Nazi scientists and doctors during the Nuremberg trials. The Nuremberg Code states that all who are participating in such an experiment are required to give voluntary consent that is free of coercion, fraud, duress or deceit. Informed consent is an extremely important marker for guiding the ethical principles necessary to the creation of a humanitarian based society, and is relevant in all segments of society impacting human rights, sexual ethics, business ethics, bio-tech ethics and political ethics. It is the primary ethical principle and philosophy to prevent rampant corruption that harbors abusive conduct that allows lies, deceit, intimidation and partial disclosure of the facts that innately steal away the consent of the people.

Given the importance of Informed Consent for the protection of Human Rights and as an ethical doctrine, it is applicable to Universal Laws in the petition of demanding factual truths of accurate events to be revealed to the human population in the event of full disclosure. At this time on the planet earth in the larger global events designed for world slavery and extradimensional entities genocidal agendas, informed consent in this larger context is non-existent. Therefore, all people interested to serve the disclosure movement can benefit through the comprehension of the higher principles of informed consent and the lack thereof, to open dialogue on the ethical implications this has made against the human race, as the demand for full disclosure grows stronger and becomes more unified. At this point, the lack of informed consent as the result of non-disclosure of true and accurate events on this planet, establishes gross negligent abuse, which can directly lead to multiple species genetic annihilation as well as other devastating consequences. [1]