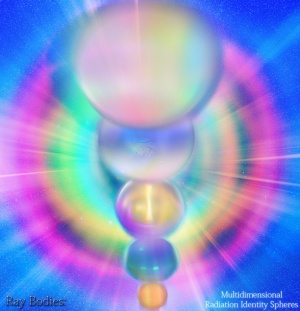 Radial Bodies are spheres that form a tissue around all layers of our Horizontal Triad Bodies. The Radial bodies work similarly as the projection screen that creates our moving hologram and determines the quality of the life we experience. The Radial Body receives through the Merkaba circulation of spiral energies the instructions held in the Blueprint and DNA of the 12 Tree Grid.

The Radial Body has the umbilicus that connects your entire Monadic and Consciousness Family all the way into your biology called the Radial Cord. [1]

Most are unaware that the extensive connective tissue of the fascia network is the manifestation of the pre-matter instruction set of tissue capsules and complex crystalline webbing that make up the multidimensional identity spheres energetic structure of the Radial Body.

Within the spiritual anatomy of the human lightbody, there are extremely refined layers of tissue capsules that act as an energetic skin which holds together the five spherical layers of the horizontal triad bodies that are collectively referred to as the Radial Body. The five horizontal triad grids are spherical energy domains that hold the morphogenetic field for the mental bodies and the stations of identity in time. Each formation of the energy sphere in a triad body shield builds a layer in the horizontal structure of the 12 Tree Grid and is directly connected to the mental body and the masculine principle that builds the internal Rod configuration. The Radial Body holds spheres within spheres that form tissue capsules or membranes around all layers of our horizontal triad bodies, which are structural shields that act similar to load bearing beams and flooring to our inner spiritual dwelling.

All living forms have a Radial body that surrounds each spherical domain in each density level and that runs life force currents through an instruction set within the blueprint of the lightbody. For every biological being, this forms into this spherical skin-like capsule that surrounds our entire physically manifested body. The Radial body is comprised of all of the five horizontal triad bodies that form into three layered spheres or structural shields. The horizontal shields are the organizational templates that instruct the consciousness in the body and its multidimensional life force currents, directing the configuration in which to bend the light and sound waves in order to create the entirety of the dimensional layered hologram. Each horizontal shield governs the functions of that particular dimensional layer in time and space, and connects directly to the spiritual embodiment process which further controls the mechanism of the merkaba spirals in each spherical domain. When the horizontal bodies unite within a trinity field, then two layers of the shields in each spherical domain activate aligning the tissue capsules and these bodies merge, which is intrinsic to the spiritual body integration process and ascension alignment to facilitate embodiment of the higher consciousness identities.

The Radial Body receives the main instruction set for its physical matter form and manifestation hologram from the Avatar Christos shield network and the DNA template from the personal 12 Tree Grid. As the multidimensional life force currents move through the meridian lines and into each of the five spherical horizontal layers that make up the Radial Body, the consciousness projects the blueprint which externalizes the holographic projection. Within the tissue capsules of the horizontal triad bodies that form into the collective Radial body, similar to the nadis structure, there exists extremely refined energy rivulets called the Radis. These energetic rivulets act as the modulator of life force currents moving between the unmanifest and manifest realms that run into the energy circulation systems of the merkaba fields that deliver the instruction sets throughout the body. The Radis is responsible for converting primal light and sound life force currents into electromagnetic units that are ionic for generating a vast array of chemical interactions for biological ionization. An ion is an atom or molecule that has a net electrical charge with extra electrons or missing electrons. Thus, the primal life force currents generate ionic fields that generate the spectrum of frequency waves and plasmas which are the foundation of electromagnetism in the lower harmonic universes.

The Radial body works much like the projection screen that creates our moving hologram and determines the quality of the life we experience in the present moment. In this way, we could consider the Radial Body as our consciousness filter or lens, through which our consciousness may perceive multidimensional reality or eternal time. The Radial Body structures are what facilitate the birth transduction sequence for multidimensional consciousness to experience physical matter while in a lightbody holographic template. It is in the zero point, the past to future pulse intersection that exists in eternal time and in the present moment, which intersects and communicates directly with the entire Radial Body. While in the now presence of compassionate witnessing, it is the Radial Body that projects your consciousness out of time while holding in the zero point.

The Radial Body receives information through the merkaba circulation of spiral energies within the instructions held in the personal blueprint and DNA of the 12 Tree Grid to form the vehicles that consciousness embodies. During the ascension process, when two or more horizontal bodies merge in the Radial Body, this activation creates a dimensionalized level of a Merkaba Vehicle. When the merkaba vehicle is generated, the lower dimensional structures of the horizontal body template in the Radial body dissolves, expanding into the next harmonic universe level and then forming into a new transharmonic ascension template within the merkaba vehicle. A transharmonic merkaba vehicle is a pre-light and sound trion field in which the consciousness, the spiritual body, can transport itself through thought projection to a chosen specific location throughout time or out of time. This advanced consciousness ability of the diamond sun matrix merkaba vehicle has been attempted to be replicated through alien machinery with partial success and great destruction to the organic time matrix, and is known as the Looking Glass technology developed by primarily Zeta Groups from Orion.[2] 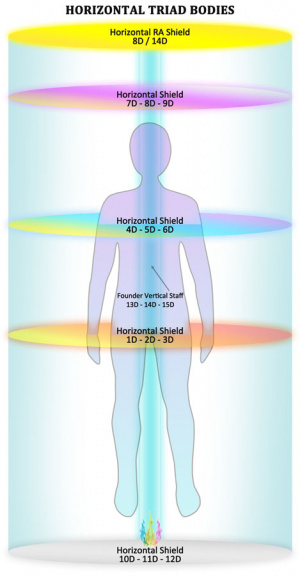 The interconnected collective layers of all of the five Horizontal Triad Bodies which includes all spherical energy domains, is called the Radial Body. These are multidimensional radiation identity spheres that encompass and protect the horizontal triad bodies. The Radial Body controls all of the internal spherical energy domains which further govern the holographic projection in the timelines that the individual consciousness experiences while incarnated in the harmonic universes. The merkaba field circulation of the instruction sets that pass into the personal [[Christos shield and then into the individuals’ DNA template are what inform the Radial Body about the specific design for the actual holographic manifestation that is being experienced in time.[3]

The Eukatharistic Lightbody Activation begins a methodical process of depolarization within each of the centers of the spherical domains that make up the horizontal shields of the three mental body identities that are held within the hova bodies. This process of depolarization of the energy fields begins in the ego-personality, then moves into Soul, Monadic, Avatar and rishic selves. Each density of the stations of identity will integrate and unify into the Lightbody via fully dissolving itself into the outer membrane of the ascending identity Radial Body, which then forms into the next stage of development in the Plasma Luminary Body.[4]