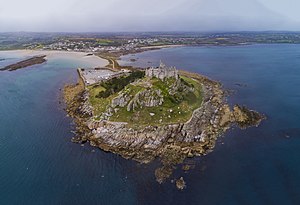 Historically, St Michael's Mount was a Cornish counterpart of Mont-Saint-Michel in Normandy, France (with which it shares the same tidal island characteristics and the same conical shape, though it is much larger, at 57 acres [23 ha], than Mont St Michel which covers 17 acres [6.9 ha]).

St Michael's Mount is one of 43 unbridged tidal islands that one can walk to from mainland Britain. Part of the island was designated as a Site of Special Scientific Interest in 1995 for its geology.

Its Cornish language name—literally, "the grey rock in a wood" may represent a folk memory of a time before Mount's Bay was flooded, indicating a description of the mount set in woodland. Remains of trees have been seen at low tides following storms on the beach at Perranuthnoe. 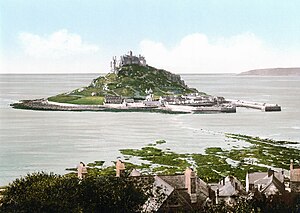 Saint Michael's Mount may have been the site of a monastery from the 8th to the early 11th centuries. Edward the Confessor gifted the site to the Benedictine order of Mont-Saint-Michel and it was a priory of that abbey until the dissolution of the alien houses as a side-effect of the war in France by Henry V. Subsequently it ceased to be a priory, but was reduced to being a secular chapel which was given to the Abbess and Convent of Syon at Isleworth, Middlesex, in 1424. Thus ended its association with Mont St Michel, and any connection with Looe Island (dedicated to the Archangel Michael). It was a destination for pilgrims, whose devotions were encouraged by an indulgence granted by Pope Gregory in the 11th century. The earliest buildings on the summit, including a castle, date to the 12th century.

The Mount was sold in 1659 to Colonel John St Aubyn. As of 2021 his descendants, the Lords St Levan, remain seated at Saint Michael's Mount.[3]