All living organisms interact and interconnect with electromagnetic waves, and all of the earth’s inhabitants, have the memory of the original earth based DNA, which is resonant to the low frequency waves emitted by the Schumann resonances into the earth’s atmosphere. The Schumann Resonances are a set of spectrum peaks in the extremely low frequency (ELF) portion of the Earth's electromagnetic field, which is similar to say that these pulses are the heartbeat of the planet. For this reason, most people will be extremely open to conduct these waves of Electromagnetic Signaling through their Bio-Neurology that is stimulated by these extremely low frequencies, such as 7.83 Hz, what became known to be the measurement of the fundamental range of these waves on earth. This range of low frequency is commonly produced by the human brain, when relaxed in alpha or theta states. Extremely low frequency or Radio Waves that are artificially or naturally generated can phase with these same frequencies in the human body, having an array of impacts on human Electromagnetic Signals which further effect brain waves and the state of Consciousness.

For the first time in recorded history, the Schumann Resonance has reached frequencies of 36+ and is heading for a maximum spike level of 50 Hz. This is a big deal and yet there is no publicly provided information on how this spike is impacting the earth's geomagnetic field and how this radically effects the human body. Three years ago in 2014, when the Schumann Resonance frequency had risen to the 15-25 Hz levels from it’s usual 7.83 frequency, it was considered as a strange anomaly that was occurring to the earth. The earth’s frequency is speeding up and this greatly impacts all of the functions of the human brain, as well as impacting the heart beat and breathing rhythm. As the Schumann frequency is accelerating quickly through these consecutive magnetic spike events, this acceleration contributes to time and spatial disorientation, as many of us feel like time has sped up and events and changes in our life are happening much more quickly. [1] 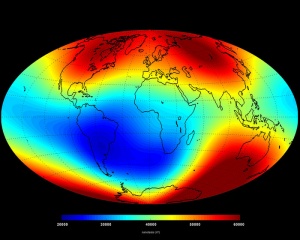 Core Magnetic Field Shifting: This is changing the atmospheric layer of the planet’s magnetic field, (As above) as well as the magnetic tone resonance that emanates from the inner core of our planet. (So below) (Science understands this core resonance tone as the Schumann Resonances) Both of these levels of the planet’s magnetic structure are tied to how the frequency code instruction set is relayed into every level of our holographic Blueprint. This instruction set is the base code of how our Hologram is written similarly as to how a computer programmer writes html code to create an internet page or program. This means the core architecture of our planet, the core foundation of the principles of matter as it manifests is being altered and changed. [2]

The urgent need for further research into the Schumann Resonance Effect: Although Schumann Resonance could easily be confirmed by measurements at the time of its discovery, it is no longer so obvious due to our atmosphere being filled with manmade radiation noise at different frequencies. This is almost drowning out the natural signals - signals that have been there through aeons of evolution. These signals act like a natural tuning fork, not just for the biological Oscillators of the brain, but for all processes of life.

With the advent of new wireless technology, in particular microwaves pulsed at frequencies close to Schumann Resonances as in mobile telephony, another problem is emerging. Humans are creating an environment that is literally out of tune with nature itself. And it is at this point that there is an urgent need for us to understand how everything alive responds to the most subtle changes in magnetic and electromagnetic fields surrounding us. For instance, we need to examine the possible interaction between magnetite crystals within cells and many manmade magnetic fields in the environment.

There is a great need for independent research into the bio-compatibility between natural and manmade signals. By linking together the potential importance of Schumann Resonance and the dangers posed by manmade pulsed frequencies, it will become apparent that unless we find a way to use bio-compatible signals to power new technology, we may expose all life to dangers previously not encountered. We may have to pay a high price for this shortsightedness. Serious attention must now be paid to the possible biological role of standing waves in the atmosphere, so that we do not overlook the importance of Oscillations in nature that may be central to Consciousness and life itself.

The late Dr Neil Cherry, a fierce opponent of the frequencies used in mobile telephony, has also focused on the importance of Schumann Resonance in his publications 'Schumann Resonances, a plausible biophysical mechanism for the human health effects of Solar/Geomagnetic Activity' (2002), and 'Human intelligence: The brain, an electromagnetic system synchronised by the Schumann Resonance signal' (2003).[3]