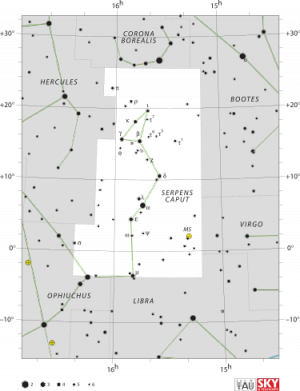 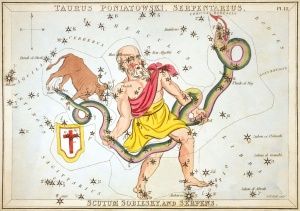 Scutum and Ophiuchus, a constellation card published in London c. 1825

The brightest star in Serpens is Unukalhai or Cor Serpentis "Serpent's Heart", with an apparent magnitude of 2.63. Part of the Milky Way passes through Serpens Cauda, which is therefore rich in deep-sky objects, such as the Eagle Nebula (IC 4703) and its associated star cluster Messier 16. The nebula measures 70 light-years by 50 light-years and contains the Pillars of Creation, three dust clouds that became famous for the image taken by the Hubble Space Telescope. Located in Serpens Caput are Seyfert's Sextet, one of the densest galaxy clusters known, and Arp 220, the prototypical ultraluminous infrared galaxy. In addition, it also contains the Hercules–Corona Borealis Great Wall, the largest object in the universe. Serpens Caput is bordered by Libra to the south, Virgo and Boötes to the east, Corona Borealis to the north, and Ophiuchus and Hercules to the west; Serpens Cauda is bordered by Sagittarius to the south,Scutum and Aquila to the east, and Ophiuchus to the north and west. Covering 636.9 square degrees total, it ranks 23rd of the 88 constellations in size. It appears prominently in the both the northern and southern skies during the Northern Hemisphere's summer. Its main asterism consists of 11 stars, and 108 stars in total are brighter than magnitude 6.5. [1]

In Greek Mythology, Serpens represents a snake held by Asclepius, a healer. Asclepius, represented in the sky by the constellation Ophiuchus, which splits Serpens into two distinct halves, was known for killing a snake that was resurrected because a different snake had placed a certain herb on it before its "death". Serpens is depicted as either winding around Ophiuchus in the night sky or simply passing through him, although the precise reason for either of these is unknown.In some ancient atlases, the constellations Serpens and Ophiuchus were depicted as two separate constellations, although in most they were shown as a single constellation. Back in this time, there were no official constellation boundaries, so when depicted separately, their bodies were not intertwined with each other.In Chinese astronomy, most of the stars of Serpens represented part of a wall surrounding a marketplace, known as Tianshi, which was in Ophiuchus and part of Hercules. Serpens also contains a few Chinese constellations. Two stars in the tail represented part of Shilou, the tower with the market office. Another star in the tail represented Liesi, jewel shops. One star in the head (Mu Serpentis) marked Tianru, the crown prince's wet nurse, or sometimes rain.[1]There were two "serpent" constellations in Babylonian astronomy, known as Mušḫuššu and Bašmu. It appears that Mušḫuššu was depicted as a hybrid of a dragon, a lion and a bird, and loosely corresponded to Hydra. Bašmu was a horned serpent (c.f. Ningishzida) and loosely corresponds to the Ὄφις constellation of Eudoxus of Cnidus on which the Ὄφις (Serpens) of Ptolemy is based. [2]

This snake, Serpens, that Ophiuchus holds (the snake-handler, who represents the healer Asclepius), is found on the symbol of medicine worldwide, the caduceus. The staff of Aesculapius was a single snake wrapped around a staff (often confused with the staff of Mercury (Hermes) which has two snakes and is said to represent commerce). Serpens is the only constellation divided into two separate pieces.

"Ophiuchus means 'he who holds the serpent' and that is how he is depicted. The struggle will last forever, since they wage it on equal terms with equal powers". [Manilius, Astronomica, 1st century AD, book 1, p.31] Serpens and serpent comes from Latin serpere, to creep, from the Indo-European root *serp-2 'To crawl, creep'. Derivatives: serpent, serpigo (a spreading skin eruption or disease, such as ringworm, from Latinserpere, to crawl), herpes, herpetology.[3]