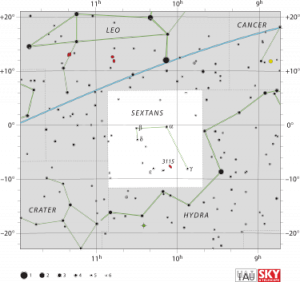 Sextans is a minor equatorial constellation which was introduced in 1687 by Johannes Hevelius. Its name is Latin for theastronomical sextant, an instrument that Hevelius made frequent use of in his observations. Sextans as a constellation covers a rather dim, sparse region of the sky. It has only one star above the fifth magnitude, namely α Sextantis at 4.49m. The constellation contains a few double stars, including γ, 35, and 40 Sextantis. There are a few notable variable stars, including β, 25, 23 Sextantis, and LHS 292. NGC 3115, an edge-on lenticular galaxy, is the only noteworthy deep-sky object. It also lies near the ecliptic, which causes the Moon, and some of the planets to occasionally pass through it for brief periods of time. The constellation is the location of the field studied by the COSMOS project, undertaken by the Hubble Space Telescope.Sextans B is a fairly bright dwarf irregular galaxy at magnitude 6.6, 4.3 million light-years from Earth. It is part of the Local Group of galaxies.[1]

A sextant is a navigational instrument containing a graduated sixty-degree arc, sixth part of a circle, used for measuring the altitudes of celestial bodies to determine latitude and longitude. Or a sextant is an instrument used to measure the angle between any two visible objects. Its primary use is to determine the angle between a celestial object and the horizon . The alpha and beta stars of Sextans are right on the zero latitude line (zero declination) on the celestial equator. Above the alpha star of Sextans, Regulus, the alpha star of Leo, straddles the ecliptic line. 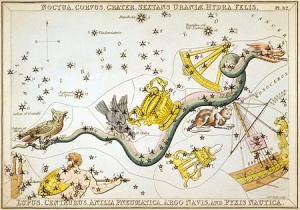 This constellation, Sextans Uraniae was created with Urania the muse of astronomy in mind. It was placed on the Hydra's back and named by Hevelius "as a sort of commemoration of the destruction of his instruments when his house at Dantzic was burnt in September, 1679; or, as he expresses it, when Vulcan overcameUrania" [Allen, Star Names]. "Ourania (or Urania) was one of the nine Muses, the goddesses of music, song and dance. In Classical times Ourania came to be titled the muse of astronomy and astronomical writings and as such was usually depicted pointing to a globe with a staff". Uranography is the branch of astronomy concerned with mapping the stars, galaxies, or other celestial bodies. The constellation Sextans represents the astronomical sextant used by Johannes Hevelius to compile one of the first accurate star maps.[3]