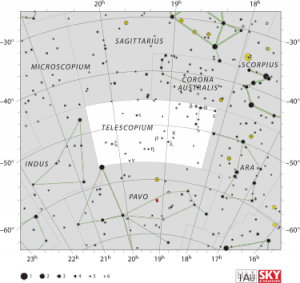 Telescopium is a minor constellation in the southern celestial hemisphere, one of twelve created in the 18th century by French astronomer Nicolas Louis de Lacaille and one of several depicting scientific instruments. Its name is a Latinized form of the Greek word for telescope. Telescopium was later much reduced in size by Francis Baily and Benjamin Gould. The brightest star in the constellation is Alpha Telescopii, a blue-white subgiant with an apparent magnitude of 3.5, followed by the orange giant star Zeta Telescopii at magnitude 4.1. Eta and PZ Telescopii are two young star systems withdebris disks and brown dwarf companions. Telescopium hosts two unusual stars with very little hydrogen that are likely to be the result of two merged white dwarfs: HD 168476, also known as PV Telescopii, is a hot blue extreme helium star, while RS Telescopii is an R Coronae Borealis variable. RR Telescopii is a cataclysmic variable that brightened as a novato magnitude 6 in 1948.

A small constellation, Telescopium is bordered by Sagittarius and Corona Australis to the north, Ara to the west, Pavo to the south, and Indus to the east, cornering on Microscopium to the northeast.

Telescopium was introduced in 1751–52 by Nicolas Louis de Lacaille with the French name le Telescope, depicting an aerial telescope, after he had observed and catalogued 10,000 southern stars during a two-year stay at theCape of Good Hope. He devised 14 new constellations in uncharted regions of the Southern Celestial Hemisphere not visible from Europe. All but one honored instruments that symbolised the Age of Enlightenment.[3] Covering 40 degrees of the night sky, the telescope stretched out northwards between Sagittarius and Scorpius.Lacaille had Latinised its name toTelescopium by 1763.