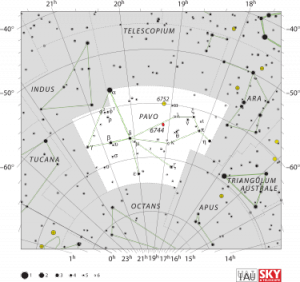 Pavo is a constellation in the southern sky with the Latin name for peacock. It is one of twelve constellations conceived by Petrus Plancius from the observations of Pieter Dirkszoon Keyser and Frederick de Houtman. Pavo first appeared on a 35-cm (14 in) diameter celestial globe published in 1598 in Amsterdam by Plancius and Jodocus Hondius and was depicted in Johann Bayer's star atlas Uranometria of 1603. French explorer and astronomer Nicolas Louis de Lacaille gave its stars Bayer designations in 1756. The constellations Pavo, Grus, Phoenix (Constellation) and Tucana are collectively known as the "Southern Birds". The constellation's brightest member, Alpha Pavonis, is also known as Peacock and appears as a 1.91-magnitude blue-white star, but is actually a spectroscopic binary. Delta Pavonis is a nearby Sun-like star some 19.9 light years distant. Six of the star systems in Pavo have been found to host planets, including HD 181433 with a super-earth, and HD 172555 with evidence of a major interplanetary collision in the past few thousand years. The constellation contains NGC 6752, the third-brightest globular cluster in the sky, and the spiral galaxy NGC 6744, which closely resembles our Milky Way but is twice as large. Pavo is the radiant of two annual meteor showers: the Delta Pavonids and August Pavonids.

Pavo is bordered by Telescopium to the north, Apus and Ara to the west, Octans to the south, and Indus to the east and northeast. Covering 378 square degrees, it ranks 44th of the 88 modern constellations in size and covers 0.916% of the night sky. [1]

According to Mark Chartrand, former executive director of the National Space Institute, Plancius may not have been the first to designate this group of stars as a peacock: "In Greek myth the stars that are now the Peacock were Argos [or Argus], builder of the ship Argo. He was changed by the goddess Juno into a peacock and placed in the sky along with his ship." Indeed, the peacock "symboliz[ed] the starry firmament" for the Greeks,[8] and the goddess Hera was believed to drive through the heavens in a chariot drawn by peacocks. The peacock and the "Argus" nomenclature are also prominent in a different myth, in which Io, a beautiful princess of Argos, was lusted after by Zeus (Jupiter). Zeus changed Io into a heifer to deceive his wife (and sister) Hera and couple with her. Hera saw through Zeus's scheme and asked for the heifer as a gift. Zeus, unable to refuse such a reasonable request, reluctantly gave the heifer to Hera, who promptly banished Io and arranged for Argus Panoptes, a creature with one hundred eyes, to guard the now-pregnant Io from Zeus. Meanwhile, Zeus entreated Hermes Mercury (Hermes)) to save Io; Hermes used music to lull Argus Panoptes to sleep, then slew him. Hera adorned the tail of a peacock—her favorite bird—with Argus's eyes in his honor. As recounted in Ovid's Metamorphoses, the death of Argus Panoptes also contains an explicit celestial reference:"Argus lay dead; so many eyes, so bright quenched, and all hundred shrouded in one night. Saturnia [Hera] retrieved those eyes to set in place among the feathers of her bird [the peacock, Pavo] and filled his tail with starry jewels." It is uncertain whether the Dutch astronomers had the Greek mythos in mind when creating Pavo but, in keeping with other constellations introduced by Plancius through Keyser and De Houtmann, the "peacock" in the new constellation likely referred to the green peacock, which the explorers would have encountered in the East Indies, rather than the blue peacock known to the ancient Greeks.[2]