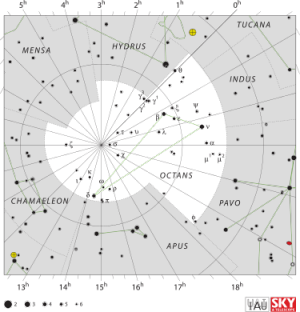 Octans is a faint constellation located in the deep southern sky. Its name is Latin for the eighth part of a circle, but it is named after the octant, a navigational instrument. The constellation was devised by French astronomer Nicolas Louis de Lacaille in 1752, and it remains one of the 88 modern constellations. Octans is bordered by seven different constellations, most of which are far more prominent than itself: Apus (the bird-of-paradise), Mensa (the table), Chamaeleon (the chamaeleon), Pavo (the peacock), Indus (the Indian), Tucana (the toucan), and Hydrus (the male water snake). Octans is a very faint constellation; its brightest member is Nu Octantis, a spectral class K1 III giant star with an apparent magnitude of 3.73.

The octant, from Latin octans, is an instrument based on the principle of the sextant (another constellationSextans) but employing only a 45° angle, and used as an aid in navigation. The word octant comes from the fact that the instrument's arc covers 1/8th of a circle (=45º). Octans is from the Indo-European root *okto(u)- 'Eight'. Derivatives: eight, octave, octavo, octet, octo-, octad, octopus. [Pokorny okto(u) 775. Watkins] The South Pole is in the constellation Octans. Right at the Poles, the Sun only rises once and sets once each year; the Sun shines for half the year and it is dark for the other half of the year. This makes a year like one long day; six months of light and six months of darkness. The Sun reaches the point farthest south of the celestial equator about December 22nd, when the Sun is highest in the sky at the south pole. The earth rotates once a day on its axis, an imaginary line that passes through Earth from its north pole to itssouth pole. To avoid confusion between geographic and magnetic north and south poles, the terms positive and negative are sometimes used for the poles of a magnet. The positive pole is that which seeks geographical north, the negative seeks the bottom or nadir.[1]