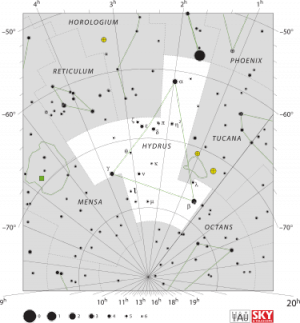 Hydrus is a small constellation in the deep southern sky. It was first depicted on a celestial atlas by Johann Bayer in his 1603 Uranometria. The French explorer and astronomer Nicolas Louis de Lacaille charted the brighter stars and gave their Bayer designations in 1756. Its name means "male water snake", as opposed to Hydra, a much larger constellation that represents a female water snake. It remains below the horizon for most Northern Hemisphere observers. The brightest star is the 2.8-magnitude Beta Hydri, also the closest reasonably bright star to the south celestial pole. Pulsating between magnitude 3.26 and 3.33, Gamma Hydri is a variable red giant some 60 times the diameter of our Sun. Lying near it is VW Hydri, one of the brightest dwarf novae in the heavens. Four star systems have been found to have exoplanets to date, most notably HD 10180, which could bear up to nine planetary companions.Irregular in shape, Hydrus is bordered by Mensa to the southeast, Eridanus to the east, Horologium and Reticulum to the northeast, Phoenix (Constellation) to the north, Tucana to the northwest and west, and Octans to the south; Lacaille had shortened Hydrus' tail to make space for this last constellation he had drawn up Covering 243 square degrees and 0.589% of the night sky, it ranks 61st of the 88 constellations in size.

This constellation, the Hydrus, is positioned near the South Pole, at the southern end of the river Eridanus. It represents the male Hydrus, from Greek hudros, a water-snake. There is another constellation representing the female Hydra, the Hydra of Lerna. The etymology for these two constellations are intertwined. Hydra and Hydrus come from the Indo-European root *wed-¹ 'Water, wet'. Derivatives: water, wet, wash (a body of water), winter (the 'wet season'), hydrant, hydro-, hydrous, utricle (a membranous sac contained within the labyrinth of the inner ear - involved in balance; also a small vestigial blind pouch of the prostate gland), dropsy, hydathode (water-excreting), hydatid, (these words from Greek hudor, water), undine (a being having water as its element), undulate (wave), abound, abundant, inundate, redound, redundant ('overflows' because there is too much of it), surround (from Latin unda, wave), otter (water animal), nutria (from Latin lutra, otter), Hydrus (from Greek hudros, a water snake), Hydra, hydrilla (diminutive of Latin hydra, a submersed plant; Hydrilla verticillata), hydrate (from Greek hudor, a water serpent), hydrocortisone (a steroid hormone to treat inflammatory conditions and adrenal failure), hydrogen (the lightest of all gases and the most abundant element in the universe), hydrochloric acid (HCl, used in petroleum production, it is found in the stomach in dilute form), hydrocephalus (abnormal accumulation of fluid in the cerebral ventricles), hydrops (old-fashioned name for heart failure, caused by a surfeit of water), hydrology, usquebaugh, whiskey, vodka. [Pokorny 9. aw(e)- 78. Watkins]This masculine Hydrus and the feminine Hydra are separate constellations. The etymology for these two constellations are intertwined. The word hydrogen could relate to either or both. Hydrogen is the most abundant element in the universe. Most of the Earth's hydrogen is in the form of chemical compounds such as hydrocarbons and water. Hydrogen gas is produced by some bacteria and algae and is a natural component of flatus or flatulence.Hydrus (Greek Hydros) might be the ocean, Oceanus, at the mouth of the Eridanus? This mythological webpage says Hydrus and Oceanus are the same: and says that Homer portrays Okeanos and Tethys as the primordial gods of creation. On this webpage Greek Mythology & the Origins of the World it says "Hydros was essentially identical to Okeanos, the earth-encircling fresh-water river, and his consort Thesis was Tethys." The Orphics developed this idea in the figures of Hydros and Thesis (the primordial equivalent of Tethys ). [1]