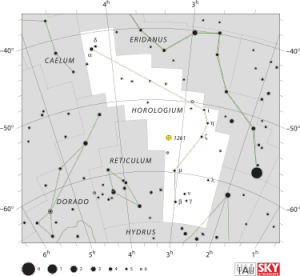 Horologium is a small and faint constellation in the southern sky (declination around −60 degrees). Its name is a Latintransliteration of the Greek word for clock (ὡρολόγιον, "the hour-teller" from ὥρα hṓra "hour and -λόγιον -logion, "teller"). The constellation was devised by French astronomer Nicolas Louis de Lacaille in 1752, and it remains one of the 88 modern constellations. Horologium was one of 14 constellations created by Abbé Nicolas Louis de Lacaille during his expedition to the Cape of Good Hope.[2] He originally labeled it Horologium Oscillitorium, the Latin name for a pendulum clock, to honour its inventor Christiaan Huygens and his book Horologium Oscillatorium.

Horologium is bordered by five different constellations:Eridanus (the Po River), Caelum (the chisel), Reticulum (the reticle), Dorado (the dolphinfish/swordfish), and Hydrus (the male water snake). The three-letter abbreviation for the constellation, as adopted by the International Astronomical Union in 1922, is Hor. The official constellation boundaries are defined by a twenty-two sided polygon. Covering a total of 249 square degrees, Horologium ranks 58th in area out of the 88 modern constellations.