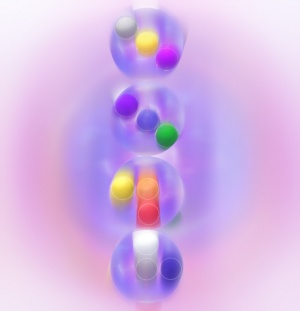 There are 5 Horizontal triad grids that hold the Morphogenetic Field or Blueprint for the Stations of Identity in each Harmonic Universe. Each triad body forms into a personal shield that builds the horizontal structure of the auric field levels of the 12 Tree Grid and is the construct for holding the mental bodies and masculine principle. The Telluric Shield begins the unification of 1D-2D-3D mental bodies upon the first Harmonic Universe which contains the extensions of the Three Layers of Ego or Personality matrix. This is also described as 3D Consciousness level. See Horizontal Triad Bodies.

The Telluric Shield holds the 1D-2D-3D layers of DNA, and its axiatonal lines, chakras and seed crystals that form the three mental bodies in the first Harmonic Universe, 1D Etheric Unconscious Mind, 2D Instinctual Mind and 3D Conscious Minds. Through Negative Ego clearing and personality integration, we will integrate the three layers of our ego in order to begin to awaken into Soul consciousness. This is where the majority of Earth inhabitants are stationed at 3D levels.

At this time during the bifurcation, the NAA and Power Elite are doing everything they can to take over the Telluric Shield in the 3D earth body and control it through Artificial intelligence, mind control, frequency nets and alien technology. These areas of the earth are recognized as the descending areas or descending zones. This is because there are a great many people on earth that are still very attached and engaged with the 3D realities and feeding their consciousness into that extremely low frequency. Ascension is a conscious choice taken by the individual and that choice is not interfered with.

On the other hand, the Ascending population of earth will be moving en masse to the next density in the harmonic scale of frequencies. For most groups, this will change the position in time of their matter blueprint from the Telluric Shield, to ascend their subatomic particles to connect with the Tribal Shield of the 5th dimension. For some people, they will not be running 1D, 2D or 3D current any longer, but will be replaced by the next density of 4D, 5D and 6D current. Others will undergo gradual frequency upgrade so that their body can comfortably adjust to these new frequencies which replace the 3D Proton, Electron and Neutron structure with its higher 5D version. This equals the planetary consciousness shift from matter density to semi-etheric matter density.

For Starseeds and Indigos, this will change the position of our matter forms from the Tribal Shield to either the Galactic Shield or Christos Shield, which also has locations in time. Many of us have been energetic placement holders of the human Tribal Shield to keep it available for the ascension event happening during this Blood Moon cycle. Each of the ascending waves, have different subatomic particle structures that span from semi-etheric, and etheric to pre-matter states of consciousness units. This shift to the next density will radically impact our consciousness experience while in our body. For those on the Ascending path, the laws governing intelligent energy that create matter and realities is elevating into the next density. This event should greatly support restoring energetic balance into all of the bodies, experiencing more peace and ease in our lives, while feeling much less dense than before.

Previously, we were all born into the 3D earth and connected into the Telluric Shield through our morphogenetic blueprint at the time of incarnation. The elemental particles of our body were designated into a timeline, governed by the Proton, Electron and Neutron structure that existed in the laws of the 3rd dimension through Telluric Current. This timeline in the 3D particle structure is ending on the earth, yet those who are resisting and do not want to evolve, are fighting hard to keep it operating.

During the Ascension Cycle, the elemental particles of our body are changing at the subatomic and atomic levels along with our expanding consciousness. We are becoming less dense at the physical level. What we perceive as solid in the holographic reality is based upon the level of DNA we have activated. Depending on the shift made to the next density, many on the Ascending path will naturally undergo slight to moderate levels of DNA activation. This means that certain wavelengths of light that were not previously seen as solid, may start to be seen as solid forms or in some kind of form that you did not perceive before in the lower dimensional scale.

This shift to the next density is increasing the materialization of both planetary miasma and individual Miasma which are the inherited and genetic patterns recorded in our cellular matrix that impact the physical body and spiritual-energetic bodies. Many of us will notice an increase in these miasmas, which will appear to be disease patterns surfacing now for us to become aware of. This is due to the genetic and inherited weakness from our family of origin surfacing in our body that is revealing to show us the area of the recorded miasma. When addressing bodily changes, which can be intense during this time, stay calm and peaceful. Ask your body consciousness and inner spirit to show you the source of the miasma, the timeline to clear it, and what you can do directly to participate with the healing of miasma. We will be addressing individual miasma, family of origin miasma, collective humanity miasma, and planetary miasma at the level our spiritual consciousness and body can handle. Miasma patterns accumulate every seven to nine years of the biological life cycle, so our current bio-spiritual marker will also be relative to the level of accumulative miasma we will be addressing now.[1]

Moving into the Next Density