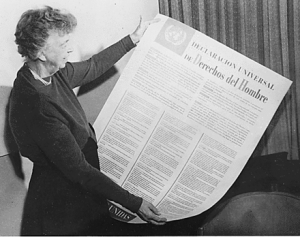 Eleanor Roosevelt with the Spanish version of the Universal Declaration of Human Rights.

The Universal Declaration of Human Rights (UDHR) is a declaration adopted by the United Nations General Assembly on 10 December 1948 at the Palais de Chaillot, Paris. The Declaration arose directly from the horrific crimes against humanity, such as genocidal holocaust, during the Second World War and represents the first global expression of rights to which all human beings are inherently entitled. The full text is published by the United Nations on its website.

The Four Freedoms were goals articulated by United States President Franklin D. Roosevelt on January 6, 1941. In an address known as the Four Freedoms speech (technically the 1941 State of the Union address), he proposed four fundamental freedoms that people "everywhere in the world" ought to enjoy:

The first two freedoms, of speech and religion, are protected by the First Amendment in the United States Constitution. His inclusion of the latter two freedoms went beyond the traditional Constitutional values protected by the U.S. Bill of Rights. Roosevelt endorsed a broader human right to economic security and anticipated what would become known decades later as the "human security" paradigm in social science and economic development. He also included the "freedom from fear" against national aggression and took it to the new United Nations he was setting up. The United Nations Charter "reaffirmed faith in fundamental human rights, and dignity and worth of the human person" and committed all member states to promote "universal respect for, and observance of, human rights and fundamental freedoms for all without distinction as to race, sex, language, or religion". After his death in 1945, Eleanor Roosevelt, his wife, became chair on the drafting committee in 1946 and was instrumental in developing the goals and mission for the Universal Declaration of Human Rights.[2]

Human rights are moral principles that describe certain standards of human behavior, and are regularly protected as legal rights in municipal and international law. They are commonly understood as inalienable fundamental rights "to which a person is inherently entitled simply because she or he is a human being," and which are "inherent in all human beings" regardless of their nation, location, language, religion, ethnic origin or any other status. They are applicable everywhere and at every time in the sense of being universal,and they are egalitarian in the sense of being the same for everyone. They require empathy and the rule of law and impose an obligation on persons to respect the human rights of others.They should not be taken away except as a result of due process based on specific circumstances; for example, human rights may include freedom from enslavement, genocide, unlawful imprisonment, torture, and execution.[3] 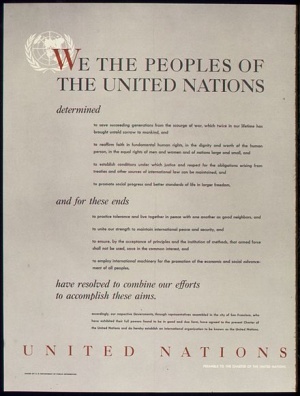 The Preamble to the treaty reads as follows: We the peoples of the United Nations determined,

Main stream Humanism defines itself distinctly as the disconnection of the human being from its inherent spiritual-energetic intelligence or Soul in an attempt to remove the concept of Humanism away from the learned bias and practices of Religion. There is no way to separate humanity from its soul, and practice Humanism. Once direct knowledge of the Soul is known as a reality, this fact is experienced without need to control religious bias, nor conform to religious rhetoric or scientific judgments.

Ascension essentially encompasses an Universal perspective towards the Compassionate practice of World Humanism and includes the entire spectrum of life, of all inhabitants of the world, no matter what race, religion, belief or creed, to be equally deserving of benevolence and Compassion.

The teachings of the Law of One describe the spiritual laws that govern our spiritual evolution for each dimension. It is a single philosophical system, which merges cosmology, science, Human Rights and spiritualism. Simply put, the Law of One is the Universal Truth that All Is One. It is the Truth taught by Christ when he proclaimed, "Love your neighbor as you love yourself." We are all direct expressions of the One Source God Source. The Law of One is an energetic reality as well as a creational covenant with the Founder Races.(The Family Entity of RA, the Melchizedek's, The Aurora Host Races) The Law of One is practiced by the Advanced Races that promote self responsibility and accountability in our Universal Time Matrix through the comprehension of the interconnection between all living things. The Law of One expresses and acknowledges the interconnection, value and interdependence of the spirit and consciousness that animates all things. This is the path to GSF.

HUMAN RIGHTS ARE MORAL PRINCIPLES THAT DESCRIBE CERTAIN STANDARDS OF HUMAN BEHAVIOUR,THEY ARE THE SAME IN GODS NATURAL LAWS, the Law of One:

1. I have the right to take care of myself, and protect myself from being threatened physically, mentally, emotionally or spiritually.

2. I have the right to set my own priorities and choose the manner I express to live on earth, as long as it does not intentionally harm others.

3. I have the right to express feelings, opinions, and desires.

4. I have the right to be treated respectfully.

5. I have the right to create my own happy, healthy life based in spiritual purpose.

6. I have the right to be GSF and be given the power to be in charge of directing my energies and life force.[5]