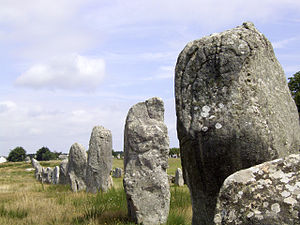 The Ménec alignments, the best-known megalithic site among the Carnac stones

Recently, in the area of Brittany, France, the Carnac standing stones have been revving up some kind of ancient machinery in the ley lines related to powering up the Sophianic diamond heart diagonal lines. The destruction-vandalization of Nantes Church was a dark attack on the diagonal lines to wreak havoc in order to prevent the success of this Sophianic diamond grid being activated into the field at this time. These particular ley lines were previously dormant, and are now linking up into the Stonehenge network. The Carnac stones are connected to our Christos family, these are Solar Dragon ancient networks being activated into the crystalline lattice work, and the Paliadorian Dragon Kings are bringing this network online at this time. This activation in the earth body is related to being able to go back to the Atlantian timelines for many corrections in the holographic matrix, of where the cataclysm and explosions appear to be when this network was shut down completely.

During its stasis dormant phase, this network was repurposed for supporting the Baphomet Network, for propagating the anti-Sophianic structures used to generate womb worlds of the demonic hierarchies. These bottom feeders would be used by other higher up black hole entities for reversal female Dragon proliferation, which acted as the gatekeepers for the Baphomet grid. The Baphomet Network and anti-female structures were key for keeping the anti-hierogamic spawn like Black Lilith creations alive, and with the Solar Dragon activation in these networks, it is returning these networks to the rightful power of the Mother’s Sophianic consciousness. The alignment is for Cosmic Mother to resurrect her Solar daughters, to protect the earth and natural kingdoms from the anti-female satanic forces of control. The land mass of France is very important to the resurrection of the Solar body of Sophianic consciousness on the earth, and this Carnac network activating during the phase of the destruction of the Baphomet Network to reconnect with Albion in the United Kingdom, helps us to understand the reasons why.

When the Solar Daughter comes, she comes in the trinity pattern, and this awakening out of stasis creates a big problem for these reversal female forces that were used to spread satanism and support for the Leviathan entities, those hierarchies which are conjured by SRA in the black magic grids. These blood sacrifice systems are being starved out, withering away. This adds to the collective consciousness spray of these shadow shards into the outer field, and these shadows are generating Ascension Madness in some people unequipped to deal with the reflection of shadow body parts into the outer grids.

The Krystallah Sophianic Sonic Pillars are related to the resurrection of the Triple Goddess principle by the Cosmic Christos Solar Dragons, this specifically overrides the use of Sophianic parts from being utilized in satanic versions using SRA with the Dark Queen Mother majic reversal female archetypal forces. The correction of sound bodies relates to overriding the female archetypal stages used in satanic rituals which hijack the female consciousness and require the Queen Mother to oversee blood sacrifices of children, and the ritualistic roles of virgin maiden to crone.[1]