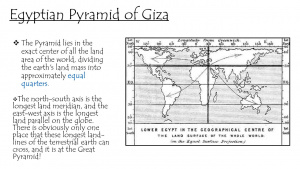 The geographical centre of Earth is the geometric centre of all land surfaces on Earth. In a more strict definition, it is the superficial barycenter of the mass distribution produced by treating each continent or island as a region of a thin shell of uniform density and approximating the geoid with a sphere. The center is inside Earth but can be projected to the closest point on the surface.

In 1864, Charles Piazzi Smyth, Astronomer Royal for Scotland, gave in his book Our Inheritance in the Great Pyramid the coordinates with 30°00′N 31°00′E, the location of the Great Pyramid of Giza. In addition, in October of that year, Smyth proposed to position the prime meridian at the longitude of the Great Pyramid because there it would "pass over more land than any other". He also argued the cultural significance of the location and its vicinity to Jerusalem. The expert committee deciding the issue, however, voted for Greenwich because "so many ships used the port of London". Referring to Smyth's book, Frederick Augustus Porter Barnard wrote in his 1884 book, The imaginary metrological system of the Great pyramid of Gizeh, that the perfect location of the Great Pyramid along the longitudinal line could only have been purposefully done by its builders. [1]

Giza is the reference to the demographic area of Egypt that is the 4th dimensional planetary stargate and diamond heart complex or Solar Temple that was a primary target of total invasion by the NAA, before, during and after the Luciferian Rebellion, in order to gain full spectrum dominance over the Sol portal, and control access into Mars, install Checkerboard Mutation, as well as take position for total earth domination during the Ascension Cycle. This location is also the geographical center of the earth body.