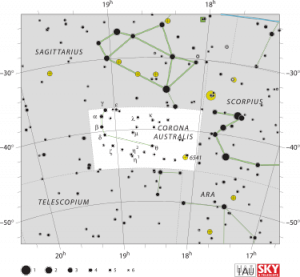 Corona Australis or Corona Austrina is a constellation in the Southern Celestial Hemisphere. Its Latin name means "southern crown", and it is the southern counterpart of Corona Borealis, the northern crown. One of the 48 constellations listed by the 2nd-century astronomer Ptolemy, it remains one of the 88 modern constellations. The Ancient Greeks saw Corona Australis as a wreath rather than a crown and associated it with Sagittarius or Centaurus. Other cultures have likened the pattern to a turtle, ostrich nest, a tent, or even a hut belonging to a rock hyrax. Although fainter than its namesake, the oval- or horseshoe-shaped pattern of its brighter stars renders it distinctive. Alpha and Beta Coronae Australis are the two brightest stars with an apparent magnitude of around 4.1. Epsilon Coronae Australis is the brightest example of a W Ursae Majoris variable in the southern sky. Lying alongside the Milky Way, Corona Australis contains one of the closest star-forming regions to our Solar System—a dusty dark nebula known as the Corona Australis Molecular Cloud, lying about 430 light years away. Within it are stars at the earliest stages of their lifespan. The variable stars R and TY Coronae Australis light up parts of the nebula, which varies in brightness accordingly.

Corona Australis is a small constellation bordered by Sagittarius to the north, Scorpius to the west, Telescopium to the south, and Ara to the southwest.[1]

Corona Australis may have been recorded by ancient Mesopotamians in the MUL.APIN, as a constellation called MA.GUR ("The Bark"). However, this constellation, adjacent to SUHUR.MASH ("The Goat-Fish", modern Capricornus), may instead have been modern Epsilon Sagittarii. As a part of the southern sky, MA.GUR was one of the fifteen "stars of Ea". In the 3rd century BC, the Greek didactic poet Aratus wrote of, but did not name the constellation,[63] instead calling the two crowns Στεφάνοι (Stephanoi). The Greek astronomer Ptolemy described the constellation in the 2nd century AD, though with the inclusion of Alpha Telescopii, since transferred to Telescopium. Ascribing 13 stars to the constellation, he named it Στεφάνος νοτιος (Stephanos notios), "Southern Wreath", while other authors associated it with either Sagittarius (having fallen off his head) or Centaurus; with the former, it was called Corona Sagittarii.[65] Similarly, the Romans called Corona Australis the "Golden Crown of Sagittarius".[66] It was known as Parvum Coelum ("Canopy", "Little Sky") in the 5th century.[67] The 18th-century French astronomer Jérôme Lalande gave it the names Sertum Australe ("Southern Garland")[65][67] and Orbiculus Capitis, while German poet and author Philippus Caesius called it Corolla ("Little Crown") or Spira Australis ("Southern Coil"), and linked it with the Crown of Eternal Life from the New Testament. Seventeenth-century celestial cartographer Julius Schiller linked it to the Diadem of Solomon.[65] Sometimes, Corona Australis was not the wreath of Sagittarius but arrows held in his hand. Corona Australis has been associated with the myth of Bacchus and Stimula. Jupiter had impregnated Stimula, causing Juno to become jealous. Juno convinced Stimula to ask Jupiter to appear in his full splendor, which the mortal woman could not handle, causing her to burn. After Bacchus, Stimula's unborn child, became an adult and the god of wine, he honored his deceased mother by placing a wreath in the sky.[2]