Dimensions are fixed groupings of energy within specific geometric arranged forms (space and time) and are built upon crystallized conscious units of sound and light called Morphogenetic Fields or manifestation templates of the 12 Tree Grid. Using the instruction sets from Morphogenetic Fields, dimensions are composed of stationary points of the vibration of sound and light, which together form a fabric of tone and into which smaller morphogenetic fields are woven. From each fixed point of sound vibration and within each dimension of manifestation field, an electrical current of Consciousness emerges. There is layer upon layer upon layer of morphogenetic fields and dimensional reality systems. A dimension is a full frequency band: repeating sequences of waves flashing on and off (particle/anti-particle universe) and it’s what we’re existing in space with.

• 12 Dimensions of our Universe (also known as Planetary Lightbodies).

• Each Dimension corresponds with a Dimensional Layer of our body, a strand of DNA and a Fire Letters that will sequentially increase as we absorb frequencies from the next dimension and expand our Consciousness.

• Each Chakra on our lightbody corresponds to a Lightbody layer both existing (personal and planetary).

• 13, 14, 15 represent the Trans-Harmonic Universe, outside of space and time and holder of the Holy Trinitized Form of Mother, Father and Christed Son whom exist as One.[1]

So, our actual goal is to connect with higher, more refined vibrating aspects of ourselves through the intention of communicating with our personal Lightbody and through committing to expanding our Consciousness in Meditation. So, when we think of our Soul, our Oversoul and these aspects of spiritual-energetic identity, this is where the understanding of the cosmology of dimensions, and dimensional spectrums are brought to awareness. (see Universal Time Matrix)When we understand the color wave spectrums of each dimension and use our Chakras as a foundational model, that again helps us to understand what the seven primary chakras function actually are. We can start with those seven dimensions of which there is a plane of reality that we as a soul/God being, multidimensional God Being actually have an intelligence and an aspect of our Self in simultaneous time that is existing on that particular plane of reality. So the Ascension is a Descension or collecting of those fragments or other identities of ourselves, as we merge them into this moment of self that we’re sharing now. We are now moving into the end of an Ascension Cycle, which in the timeline… (And what a timeline is goes back to the Ascension concept. The easiest way to equate Timelines or a time grid is also to recognize that is also a dimension.) The Higher dimensions that we are moving into represent future time and space. As we move through progressively refined and higher fields of energy, we move through each of the subharmonic frequency bands within each dimension. [2] 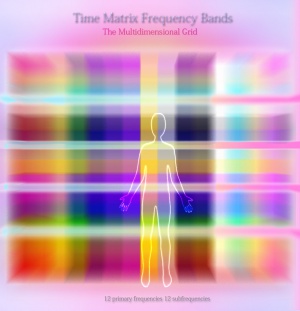 The process of dissolving the lower-dimensional energy layers within the Consciousness Field and transmuting their particle content into the next dimensional band of frequency is referred to as a Stellar Activation and is a part of the mechanics of Ascension. As the planetary body or human body evolves through these multiple levels of frequency accretion, the energetic layers within the Auric Field progressively undergo transmutation of form. Once a personal energy or Auric Field has accreted most of the frequency bands from the dimensions that compose one Harmonic Universe, (i.e. The Earth's Field) the energy layers that correspond to these lower dimensions begin to dissolve. The particles contained within the dissolving auric layers open into the auric layers of the next highest dimensions, in the next Harmonic Universe up. This is the energetic Ascension Dynamics by which forms and Consciousness progressively evolve from one dimensional span of experience to the next.These Stellar Activations are a natural part of the light accretion/evolution process, and occur as the pulsation rate of particles in the lower dimensions speeds up into the rhythms of the next dimensional frequency bands.[3] 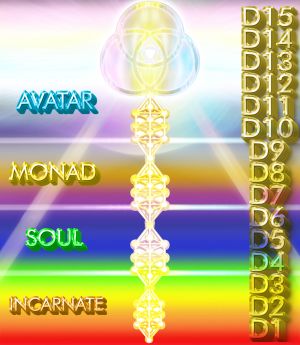