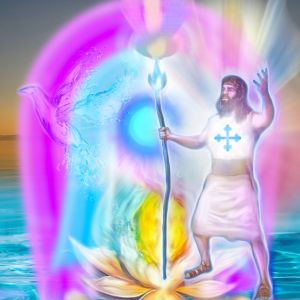 John the Baptist (art by Sequoia)

Christians have long interpreted the life of John the Baptist as a preparation for the coming of Jesus Christ, and that the circumstances surrounding his birth are miraculous. This appears to be quite accurate.

The Cosmic Christos Solar Dragon King that served as the Father of Dragons and as the Universal Melchizedek Rod Holder (Rod of God) in our time matrix has had many lifetimes serving the functions of his sacred hierogamic twinned embodiment as an Emerald Dragon Timekeeper, and Holy Father of the Azurite Hyperboreans on Gaia. This Dragon King was one of our most important leaders, and he was with us on all Sirius B Maharaji Christos reclamation missions, until he was unable to do so after the Iron Age Christos Mission, which was his last embodiment in this timeline. This has been viciously memorialized as False Michael “slaying the Dragon”, where the meaning and association to Dragons as evil has been entirely twisted by the religious control mechanism of the NAA.

The Solar Dragon King known as John the Baptist holds a similar position to that of Ezekiel. Earlier this year with the Liberation of Ezekiel we learned that he embodied the Holy Father Triple Solar Masculine Christ principle of the Solar Rod Template held in the 8D Gaian Matrix. Now we have reached into the level of the Universal Melchizedek Rod holder that is the Cosmic Triple Solar Melchizedek Shield, which was imperative in finally reclaiming the 12D Stargate system from Wesa-Thuban control, as the island housed an ancient Emerald Order Melchizedek Cloud base that is stationed in the future timelines of Kauai. This was an AI run base of artificial Emerald Order representatives and Founder Records being meticulously disseminated, curated and controlled by Thuban entities using humans to build out the architecture they needed for their virtual realities used to seed new species of human-alien hybrids.

The identity widely known as John the Baptist incarnated with the Yeshua Mission in order to initiate or baptize Yeshua and his wife Mary Sophia, and the Blue Ray Melchizedek group into the available solar frequencies of the diamond sun template that is the Avatar Christos consciousness. This mission was partially successful, however the consequences of the severe retaliation made against the Founders trapped them in several planets and phantom matrices, which acted as spiritual torture devices. Beloved John the Baptist, was subjected to this NAA machinery which was designed to repeatedly clone his body parts into forms of the anti-Christ. Ultimately, this was designed to destroy his Melchizedek God seed coding that is shared with his Maharaji Indigo lineage and permanently destroy the 12D stargate and its connections to the Melchizedek Logos and Founder races. Obviously, through our experience and testimony, they were not successful.

Essentially, the Universal Melchizedek Rod Holder as Holy Father Melchizedek has the immense spiritual power to initiate the Blue Ray lines holding his dormant genetic code into a full-fledged Avatar Christos. Thus, John received the full might and power of all Wesan technology used by the NAA forces to attempt to obliterate his existence entirely from the Milky Way Galaxy.

John the Baptist and his divine counterpart wife were Blue Ray Melchizedek Priests and Guardian representatives of the Sirius B Christos Mission and Indigo team, serving the leadership functions and spiritual initiations with the Melchizedek Rod in the Essene group that formed the Yeshua Mission (Known as Jesus the Christ). As Christos Templar gridworkers, they came to repair the Giza and Stonehenge Stargate with rainbow rounds, and prepare the planetary grid network for the reclamation of the Christos Diamond Sun body template and the Ascension timeline events happening in 2012.

Sadly since then, their identities had been repeatedly cloned by the NAA and ritualized by satanic forces in order to capture their spiritual body parts and direct their Melchizedek Priestly knowledge and power into blood sacrifices that contain human or animal beheading ritual offerings. This barbaric practice and its AI programs were fomented in the Middle East stargate system, as retaliation by the Wesan-Thuban Draconians directly targeting John and his authentic hierogamic wife for utter destruction of their Melchizedek God seed coding, which connected them directly to the Melchizedek Maharaji Logos. Assorted esoteric religious fanatics and satanic high priests presiding over lunar based religions requiring sacrifices, have used this beheading ritual as a type of blood cleansing for personal sins, as setting necromancing curses against their enemies or for conjuring Baphomet’s related astral forces of Leviathan. Thus, factions of secret societies run by the Luciferian Templars, as well as Crowley’s OTO were involved in hijacking some of the Gnostic practices attributed to John’s sacred prayers and songs. As the fountainhead of the Essenes, these practices were directly embodied or translated from the Emerald Founder records by John, Yeshua and team. Copper scrolls commissioned by Akhenaton during his Amarna period also appear to be a divine source of inspiration for the John-Yeshua led Essene groups that would incarnate and return to Amarna over a thousand years later.

The antichrist forces purposely inverted the holy content and language of the Melchizedek spiritual power for the use of satanic blood sacrifice, with John the Baptist as the central figure in which they consecrate blood sacrifices as the beheaded effigy of John being offered to the NAA. There were extensive AI red cube networks transmitting fanatic zealotry mind control programming, surrounded with etheric energy shrines featuring the decapitation of those people considered apostates, infidels and goyim sacrificed in John the Baptist’s name. This is a powerful form of sorcery sent through vitriolic hatred towards those groups who do not worship the satanic religions or deviate from the mind controlled religious belief systems. Thus, this long history has made powerful black magic and necromancer curses surrounding any connection to John the Baptist and his authentic wife, their names, energy signatures, body parts, and Melchizedek Priesthood knowledge are highly coveted and despised.

Those driven to insanity over greed, envy and jealousy, who deeply desire worldly power and spiritual knowledge that John and Mara embody as One, will never have access to the Universal Melchizedek Rod and Melchizedek God Seed, but will instead hold great contempt for them and their Indigo lineages. This process of restoring John the Baptist is ongoing in unpacking the many artificial holograms, implants, false identities and NAA booby traps running all over the planetary grid network. These are energy weapons that have been used to attack any Blue Ray Melchizedek family member that attempts to unravel the lies in the artificial holograms, in order to get access to the truthful events about John the Baptist and his true role in hidden human history. It is interesting to note the infamous Shroud of Turin, which is an NAA fabricated artifact for exerting the Church of Rome’s powerful sorcery over humanity, has been housed in the Cathedral of St. John the Baptist in Turin, Italy since 1578.

When reclaiming John the Baptist’s Melchizedek body parts, the massive level of disfigurement and cloned satanic ritualized body parts, with beheaded effigies along with their Melchizedek signature strewn across hell realms and extending into other planets, is absolutely staggering. As gridworkers retrieving body parts for Christos family members, getting John and Mara’s Universal divine hierogamic couple parts returned to them, requires the utmost compassionate witnessing. The clearing work on their behalf was one of the most dreadful and horrifying retrievals, the kind that could severely traumatize the uninitiated and cause nightmares for a lifetime.

If guided, may the pure love in our crystal hearts send our loving appreciation to all that is Beloved John the Baptist and his beloved wife Mara, may the sacred truth of One purify us all and set us free!