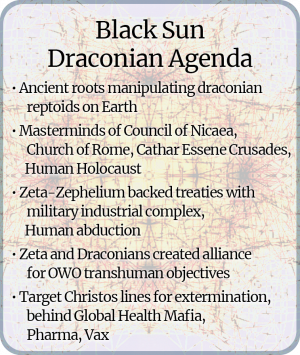 Militarization is the process by which a society organizes itself for military conflict, war and violence that is based upon the glorification of the military and the cultural values that are placed upon military based power. With the social engineering of the death culture, militarization is used by those in the world governmental power as a strategy for maintaining global dominance, ensuring geopolitical interests, as well as exercising exopolitical power and control. Militarization can inject massive amounts of cash and resources to revive an industry, boost a nation’s faltering economy or to carry out an assortment of dominance based agendas through the strong-arm of the military industrial complex. The military industrial complex outwardly appears as the alliance made between a nation’s military and the defense-arms industry, the massive corporate transnationals that supply all military technology and weapons meant for waging war. Also understood to be serving the Blood Sacrifice or killing of the human race. Thus, the military industrial complex is the deep cover used to conceal the presence of the NAA to carry out their long term divide and conquer warfare strategy against the people of this earth. See Black Sun Program.

The defense or arms producing industry is a global commercial industry responsible for the manufacturing and sales of weapons and military technology throughout the world. Departments of government also operate in the arms industry, buying and selling weapons, munitions and other military items, which infuse billions into the vast political network that is supporting the endless war economy.

The driving force behind this relationship between the government, defense contractors and arms dealers are the corporate conglomerates behind them that massively profit off of the suffering of humanity. One side of the deal is obtaining the weapons to kill or make war, while the other side is being paid exorbitant amounts to manufacture and supply the weapons. Thus, the setup is for the Controllers to make obscene profits on both sides, while promoting the negative narrative of ever-present enemies. The manufacture of endless enemies maintains the external locus of control over humanity, to suffer in endless wars and live in a permanent war economy.

The Controllers are addicted to maintaining coercive power on the world stage, the same way abusers and tyrants gain and maintain total control over a victim for selfish gain and abusive purposes, such as perpetrating physical, psychological, sexual or financial abuse. The goal of the power abuser is to control and intimidate their victims on the earth into learned helplessness, and to influence the general population to feel that they are powerless to change anything in their lives. When the human race is subdued and distracted through the various psychological warfare tactics that condition learned helplessness into the human psyche, they can only deal with the current pressures of today. When we only look at today we look for instant gratification and do not consider the long-term consequences of today’s actions. We remain ignorant of the long term consequences of the Soft Kill Agendas in play around us.

What are Soft Kill Agendas?

Military war strategists that have identified enemy targets for divide and conquer agendas, whether they are human or nonhuman, apply the exact same kind of war strategies. Whether that target is nations, populations or an entire planet, when assuming the strategy for takeover the strategies are the same. One obvious conclusion for experienced military personnel that attack enemies from the ground or from the air, is that long term planning for implementing soft kill methods have a far better performance record. This is especially so when the intelligence operation can remain concealed and thus requires much less physical resources than hard kill methods.

Soft kill is a military term used to describe the covert agenda for slow killing without the knowledge of the person or persons under attack, using disinformation, withholding evidence and psychological warfare tactics.

It is the act of disabling an enemy target without the use of outward physical destructive force. Soft kill also refers to the use of hidden technologies to subdue enemies. Such as applying electronic technology countermeasures for crowd control that alter the electromagnetic signature of a person, whether used on individuals, groups or entire populations. Thereby altering the physical body, as well as psychological and emotional behavior of the group that is being targeted for subjugation through the use of electromagnetic technology and mind control.

If we can see the current soft kill measures in the environment that have been methodically put in place through the well thought out long term planning of the Controllers, we can easily see the hidden purpose of these genocidal methods, including the eugenicist policies leading back to the divide and conquer agenda of the NAA. An example of current soft kill agendas is the enforcement of legal poisoning in the general public that is made through vaccinations, water fluoridation, GMO, chemtrails, herbicides, pharmaceutical drugs and other chemical biological weapons. All of these examples change the electromagnetic frequency and chemistry of the body, brain, CNS and DNA signals, which are designed to radically impair immunity, consciousness and intelligence factors over the longer term.

The majority of the population is on high stress overload trying to meet the most fundamental and basic human needs. As a result, many people cannot begin to fathom the larger reality of the off planet NAA divide and conquer agendas, combined with the Controllers on the ground implementation of soft kill methods. However, there are individual and collective actions that we can take that help us to empower our selves and each other, and to know that we can make a difference.

Gaining knowledge that this divide and conquer agenda is happening against the people of this earth, and to identify what it looks like in everyday life is the first important step.

We have to see it operating and understand what the motivation behind the agenda really is, before we can find the courage to take productive steps forward. The most empowering step we can take now is developing our heart based relationship to our higher self, and working on ourselves spiritually. We must find within our heart our direct connection to God, our highest power, whatever that sacred heart connection to all of life truly means to you. When we are spiritually connected we gain the inner strength, courage and higher intelligence that lends itself to the coping skills we need to overcome the dark night of the soul and spiritual warfare. Challenging circumstances can often lead us to work towards making important changes in our lives that shift our awareness and priorities to be aligned with our inner spirit. No matter what is happening in our world, we can move into states of greater wisdom that bring more deeply meaningful experiences with others, so that we can exchange unconditional love, peace and contentment.[1]