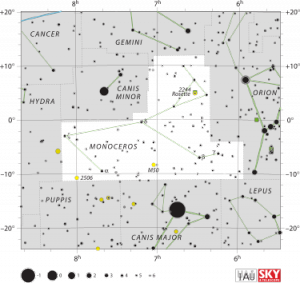 Monoceros is a faint constellation on the celestial equator. Its name is Greek for unicorn. Its definition is attributed to the 17th-century Dutch cartographer Petrus Plancius. It is bordered by Orion (Constellation) to the west, Gemini (Constellation)to the north, Canis Major to the south and Hydra to the east. Other bordering constellations include Canis Minor, Lepus and Puppis. Monoceros also contains Plaskett's Star, which is a massive binary system whose combined mass is estimated to be that of almost 100 Suns put together.

Monoceros contains many clusters and nebulae, most notable among them:

Monoceros is a relatively modern constellation. Its first certain appearance was on a globe created by the Dutch cartographer Petrus Plancius in 1612 or 1613[7] and it was later charted by Jakob Bartsch as Unicornu on his star chart of 1624. Heinrich Wilhelm Olbers and Ludwig Ideler indicate (according to Richard Hinkley Allen's allegations) that the constellation may be older, quoting an astrological work[10] from 1564 that mentioned "the second horse between the Twins and the Crab has many stars, but not very bright"; these references may ultimately be due to Michael Scot of the 13th century, but refer to a horse and not a unicorn, and its position does not quite match. Joseph Scaliger is reported to have found Monoceros on an ancient Persian sphere. [Camille Flammarion] believed that a former constellation, Neper (the "Auger"), occupied the area of the sky now home to Monoceros and Microscopium, but this is disputed.[1] 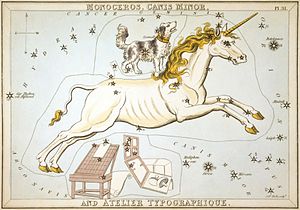 The unicorn (Latin unus 'one' and cornus 'horn') is a mythical beast depicted with the body of a horse and a spiral horn on its forehead. The unicorn's horn was said to have the property of being able to neutralize poisons. The picture of a Unicorn was the apothecaries' symbol. The powdered root of the 'unicorn horn' was believed to be a panacea for just about all illnesses. Ancient Greek writers associated the unicorn with the Hippoi Monokerata, One Horned Asses, in which it is said "the fabulous unicorn of Medieval bestiaries was derived from this creature of Greek legend." [2]