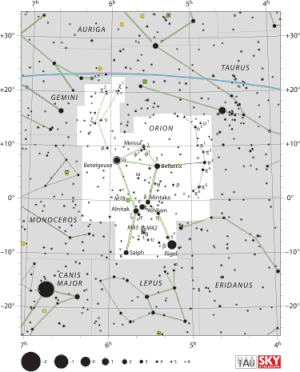 Orion is a prominent constellation located on the celestial equator and visible throughout the world. It is one of the most conspicuous and recognizable constellations in the night sky. It was named after Orion, a hunter in Greek mythology. Its brightest stars are Rigel (Beta Orionis) and Betelgeuse (Alpha Orionis), a blue-white and a red supergiant, respectively.The earliest depiction that has been linked to the constellation of Orion is a prehistoric (Aurignacian) mammoth ivory carving found in a cave in the Ach valley in Germany in 1979. Archaeologists have estimated it to have been fashioned approximately 32,000 to 38,000 years ago.The distinctive pattern of Orion has been recognized in numerous cultures around the world, and many myths have been associated with it. It has also been used as a symbol in the modern world.

The Babylonian star catalogues of the Late Bronze Age name Orion MULSIPA.ZI.AN.NA,"The Heavenly Shepherd" or "True Shepherd of Anu" - Anu being the chief god of the heavenly realms. The Babylonian constellation was sacred to Papshukal and Ninshubur, both minor gods fulfilling the role of 'messenger to the gods'. Papshukal was closely associated with the figure of a walking bird on Babylonian boundary stones, and on the star map the figure of the Rooster was located below and behind the figure of the True Shepherd—both constellations represent the herald of the gods, in his bird and human forms respectively.

In ancient Egypt, the stars of Orion were regarded as a god, called Sah. Because Orion rises before Sirius, the star whose Heliacal rising was the basis for the Solar Egyptian calendar, Sah was closely linked with Sopdet, the goddess who personified Sirius. The god Sopdu was said to be the son of Sah and Sopdet. Sah was syncretized with Osiris, while Sopdet was syncretized with Osiris' mythological wife, Isis. In the Pyramid Texts, from the 24th and 23rd centuries BC, Sah was one of many gods whose form the dead pharaoh was said to take in the afterlife.

The Armenians identified their legendary patriarch and founder Hayk with Orion. Hayk is also the name of the Orion constellation in the Armenian translation of the Bible.The Bible mentions Orion three times, naming it "Kesil" (כסיל, literally - fool). Though, this name perhaps is etymologically connected with "Kislev", the name for the ninth month of the Hebrew calendar (i.e. November–December), which, in turn, may derive from the Hebrew root K-S-L as in the words "kesel, kisla" (כֵּסֶל, כִּסְלָה, hope, positiveness), i.e. hope for winter rains.): Job 9:9 ("He is the maker of the Bear and Orion"), Job 38:31 ("Can you loosen Orion's belt?"), and Amos 5:8 ("He who made the Pleiades and Orion"). In ancient Aram, the constellation was known as Nephîlā′, the Nephilim may have been Orion's descendants.

Main article: Orion (mythology)Orion in the 9th century Leiden Aratea. Orion's current name derives from Greek mythology, in which Orion was a gigantic, supernaturally strong hunter of ancient times, born to Euryale, a Gorgon, and Poseidon (Neptune), god of the sea in the Graeco-Roman tradition. One myth recounts Gaia's rage at Orion, who dared to say that he would kill every animal on the planet. The angry goddess tried to dispatch Orion with a scorpion. This is given as the reason that the constellations of Scorpius and Orion are never in the sky at the same time. However, Ophiuchus, the Serpent Bearer, revived Orion with an antidote. This is said to be the reason that the constellation of Ophiuchus stands midway between the Scorpion and the Hunter in the sky. The constellation is mentioned in Horace's Odes (Ode 3.27.18), Homer's Odyssey (Book 5, line 283) and Iliad, and Virgil'sAeneid (Book 1, line 535).

Orion had a number of titles signifying the word 'giant': The Jews called Orion Gibbor, the Giant. "The Syrians knew Orion as Gabbara; the Arabians as Al Jabbar, both signifying 'the Giant', Gigas, giant, Greek title for Orion with Ptolemy, — and in Latin days occasionally Gigas; the Arabian word gradually being turned intoAlgebra (the prefix al- means 'the'), Algebaro, and, especially in poetry, Algebar, which Chilmead gave as Algibbar (Al Gibbar, 'the giant')". Our words giant and gigantic, and the word giga- (prefix meaning a billion) come from Latin gagas, Greek gigas. Orion is referred to as 'earthborn' because the gods Zeus, Hermes and Poseidon urinated into a bull's hide and buried it in the earth. In Greek mythology the gigantes were (according to the poet Hesiod) the children of Uranos and Gaea (the Heaven and the Earth). The prefix gi- of 'giant', is believed to come from Gaia, or Gaea, meaning earth, Gaea-antis. [1]