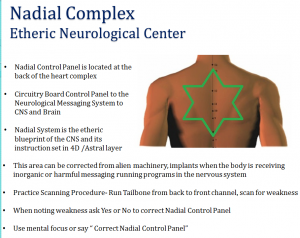 The recalibration occurrence for the planetary body is in proportion to the Krystal Star current energetic flow held within the Krystal frequency buffer field. These are the Krystal Star Spires and its network that was placed into the planetary brain and key points in its consciousness layers (the planetary aura and its demographic area stargate system) to support the rebuilding of the Crystal Heart to override and repair the Anubian Black Heart networks. The gradual flow of the Krystal Current is being circulated throughout multiple layers of the complex planetary neural (nadial) network. The combined frequency tones that generate the Krystal Current (called inter-dimensional resonators, see KA RA YA SA TA AA LA) make up the merkabic geometry patterns of the Krystal Star and Christos. These sets of merkabic geometries hold mathematical patterns that reset the entire planetary grid structure into trinitized energy formats that run Triad Communication Stations. This must happen slowly and gradually to support the transition of all biological life on earth as safely as possible. Many of us are the planetary “acupuncture points” of Spectrum of Frequency and as our body resonates to these new frequency tone patterns, we are undergoing a major biological and spiritual upgrade. The recalibration process to the Krystal Star current and the Silicate Matrix has begun a series of extremely deep cellular changes that impact our bodies and our planet dramatically.