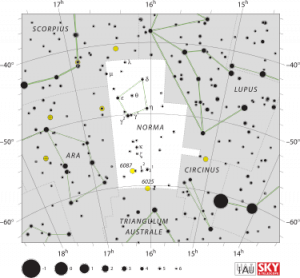 Norma is a small and inconspicuous constellation in the southern hemisphere between Scorpius and Centaurus. Its name is Latin for normal, referring to a right angle, and is variously considered to represent a rule, a carpenter's square, a set square or a level. Norma, originally named l’Equerre et la Regle in French, was one of the constellations invented by Abbé de Lacaille in the middle of the 1750s, when he was measuring about 10,000 stars at the Cape of Good Hope. Norma represents a carpenter's square, used in the Age of Exploration by carpenters on exploratory vessels.The Milky Way passes through Norma. Due to its location on the Milky Way, this constellation contains many deep-sky objects, the most notable of which is NGC 6087. Sp 1 (or PK 329+02.1) is a planetary nebula better known as the Fine-Ring Nebula.

Abell 3627, also called the Norma Cluster, is a galaxy cluster located at a distance of approximately 200 million light-years from Earth with a redshift of 0.016. It is one of the most massive galaxy clusters known to exist, at ten times the average cluster mass, and is thus theorized to be the Great Attractor, a massive object that is pulling the Local Group, the Virgo Supercluster, and the Hydra-Centaurus Supercluster towards its location at 600-1000 kilometers per second.

This constellation, Norma, 'the Carpenter's Square', and its adjoining constellation Circinus, 'Pair Of Compasses for drawing circles', might be taken as a pair. The two together are the emblems of masonry, and the symbol of Freemasonry. The words Norma and gnomon are from the same root *gno- 'To know'. The Greek word gnomon refers to two different objects; the pointer on a sundial, and also a carpenter's square or L-shaped bar. The stylus or gnomon of a sundial casts a shadow by which the time is indicated on the dial. The shape of an upright pointer and shadow together have a 90 degree-angle; as has carpenter's square. Pillars, columns, standing stones, or a stick stuck upright in the ground, serve the same shadow-making purpose as the gnomon or stylus.

Gnomon is the style of a sundial. Gnome is a word coined by the Swiss physician and alchemist Paracelsus (born 1493) for the elementals.[1]