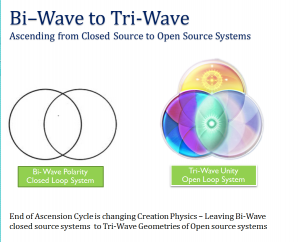 God source code is a Trinity Wave accessed through the merging of polarity, such as the merging of masculine and feminine energies, our species has been suppressed through Bi-Wave Influences that split apart the gender polarity making it impossible to connect to God Source through the sacred union of the male and female. Sacred Union is our divine birthright and this organic architecture is now being returned to our species during the Ascension Cycle as Hieros Gamos. This gender polarity pattern is changing now on our planet and we are able to access a new Trinity Wave or unity code through these male "Rod and female Staff" embodiment.

This embodiment is also referred to as Hieros Gamos, and is the foundation of the HGS system.[1]

Guardian Assignments include Starseed couplings have been a work in progress in the planetary field architecture since February of 2009 to sequentially dismantle the polarity(bi-wave) of the Vesica Pisces harness and the NRG program headquartered in the United Kingdom. The use of these structures on the planet is to collect, siphon and transpose life force and sexual energy from human beings and to promote enslavement and Sexual Misery. (To override this extreme polarity distortion these couples build a platform for the Trinity Wave field which allows true tantric (heart) union to occur.) The revelation hidden inside these “sacred unions” are astounding as they have so many different dimensions of purpose for the Ascension process. 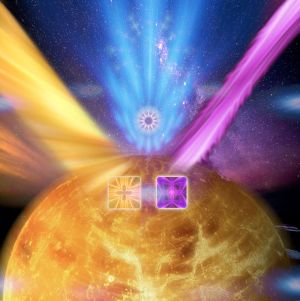 The source code or Unity Field intelligence field is a Krystal Star (Christos Consciousness) hub accessed through the merging of manifested bodies holding trinity wave formats that connect directly into the Eternal Source light (Godhead). The three sound-wave-tone parts when merged into internal energetic balance become designed as one component that access directly into the feedback loop exchanging with the Eternal source supply. This exchange with the Threefold Founder Flame godhead is the principle of Christos, an inner sustained eternal source light which signals the end of vampirism or consumptive modeling on planet. This is what it means that the Godhead cannot be reached by anything but the Christos Consciousness (Krystal Star Tones),KA_RA_YA_SA_TA_AA_LA although this process of unifying consciousness with the Godhead is known by many different names.[2]

When the life force energy is drawn back into the source field, through the trinitized geometries, the feedback loop of reciprocal source light is generated and expanded. Our goal during the new paradigm is to create the tri-tone (neutral) field. This draws the composite energy back into the zero point, through a feedback loop of energy, back into the source of all creation. The trinity field creates an eternal and perpetual supply of life force that regenerates the bodies by restoring the energy loss, and eventually expanding consciousness. The Krystal Spiral has the potential to dissolve artificial structures that have attached or enmeshed with our Lightbody from other lifetimes, due to trauma histories and alien hybridization coding. It recollects and reorganizes spiritual body parts, while returning obsolete energies back to be reabsorbed in the Cosmic Mother’s womb.

It is possible to accomplish this with spiritual dedication and service to develop our highest consciousness. Essentially, the use of correct mathematical principles based upon the trinity field, can return the free energy system of zero point, back to earthlings. Christ Consciousness connection to the zero point can be proven mathematically, as well as through one’s direct spiritual experience.

This eternal supply of life force is the Cosmic Christos plasmic light and contains the trinity principle. When this pattern is applied to matter, it is called a trinitized form. In simple terms we accomplish this through genuinely opening our hearts, and practicing unconditional love, kindness, forgiveness and true compassion towards the self and others. If you practice the Law of One as a committed lifestyle, any person can and will organically connect to the Krystal Spiral transmission. A personal commitment and dedication to loving and compassionate behaviors, to serving your highest expression, is the single most important factor of Ascension. Radiant Love is the most important force to fully embody, and whatever technique, you choose to further develop true loving-kindness is inconsequential.

The Krystal Spiral perpetually retains a living, breathing connection through the preservation of what came before, as it expands through multiplication. Out of the one comes the many. This statement is to contemplate the profound meaning of the upcoming Aquarian influence during the 12th alchemical stage of Multiplication. Multiplication is the alchemical process, which greatly increases the concentrated refinement, energetic effectiveness and sphere of influence, of the embodied biological Christos-Sophia eternal light source.[3]