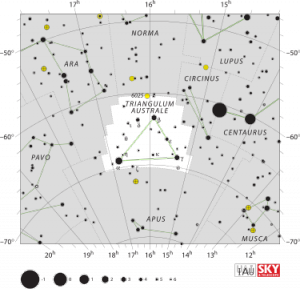 Triangulum Australe is a small constellation in the far southern celestial hemisphere. Its name is Latin for "the southern triangle", which distinguishes it from Triangulum in the northern sky and is derived from the almost equilateral pattern of its three brightest stars. It was first depicted on a celestial globe as Triangulus Antarcticus by Petrus Plancius in 1589, and later with more accuracy and its current name by Johann Bayer in his 1603 Uranometria. The French explorer and astronomer Nicolas Louis de Lacaille charted and gave the brighter stars their Bayer designations in 1756. Alpha Trianguli Australis, known as Atria, is a second magnitude orange giant and the brightest star in the constellation, as well as the 42nd-brightest star in the night sky. Completing the triangle are the two white main sequence stars Beta and Gamma Trianguli Australis. Although the constellation lies in the Milky Way and contains many stars, deep-sky objects are not prominent. Notable features include the open cluster NGC 6025 and planetary nebula NGC 5979.

Triangulum Australe is a small constellation bordered by Norma to the north, Circinus to the west, Apus to the south and Ara to the east. It lies near the Pointers (Alpha and Beta Centauri), with only Circinus in between.[9] The constellation is located within the Milky Way, and hence has many stars. A roughly equilateral triangle, it is easily identifiable. Triangulum Australe lies too far south in the celestial southern hemisphere to be visible from Europe, yet is circumpolar from most of the southern hemisphere.

Triangulum Australe has few deep-sky objects—one open cluster and a few planetary nebulae and faint galaxies. NGC 6025is an open cluster with about 30 stars ranging from 7th to 9th magnitude. Located 3 degrees north and 1 east of Beta Trianguli Australis, it lies about 2,500 light-years (770 parsecs) away and is about 11 light-years (3.4 parsecs) in diameter.

Italian navigator Amerigo Vespucci explored the New World at the beginning of the 16th century. He learnt to recognize the stars in the southern hemisphere and made a catalogue for his patron king Manuel I of Portugal, which is now lost. As well as the catalogue, Vespucci wrote descriptions of the southern stars, including a triangle which may be either Triangulum Australe or Apus. This was sent to his patron in Florence, Lorenzo di Pierfrancesco de' Medici, and published as Mundus Novus in 1504.[2] The first depiction of the constellation was provided in 1589 by Flemish astronomer and clergyman Petrus Plancius on a 32½-cm diameter celestial globe published in Amsterdam by Dutch cartographer Jacob Floris van Langren,[3] where it was called Triangulus Antarcticus and incorrectly portrayed to the south of Argo Navis. His student Petrus Keyzer, along with Dutch explorer Frederick de Houtman, coined the name Den Zuyden Trianghel.Triangulum Australe was more accurately depicted in Johann Bayer's celestial atlas Uranometria in 1603, where it was also given its current name. [1]

The two triangles in the sky each suggest a trinity. Triangulum Australe, the Southern Triangle, was given the title 'the Three Patriarchs', representing the biblical Abraham, Isaac, and Jacob, suggesting a masculine trinity. The word patriarch has its counterpart in matriarch. [The Northern Triangle, Triangulum, has feminine associations in mythology.] Patrilineality, also called 'agnatic kinship', is a system in which one belongs to one's father's lineage. The agnatic ancestry of an individual is that person's pure male ancestry. The Y chromosome (Y-DNA) is paternally inherited [the letter Y has three points?]. Patriarch can be broken down pa-tri-arch 'three father archetype', or, pa-tribe-arch, which is the usual understanding of the word; a father who rules his family or tribe from Greek patria, 'family, lineage', and -arches, 'leader, archetype'. The suffix pa- from apa, father, papa, and -tri-arch, might also relate to the trinity; three persons in the one god. The words tri-angle, tribe and three are from the same Indo-European root *trei-'Three'. A number of these derivatives have masculine connotations: Derivatives: three, tribe, tribune, tribute,contribute. From the compound form *tri-sta-i-, 'third person standing by' (-sta-, standing), testimony, testicle,testis, testes, attest, contest, detest, obtest, protest, testify, testament (from the word testes, referring to the male generative organs, that contain the 'seeds of life', from Latin testis, a witness), intestate (‘not having made a will’), sitar (a stringed instrument of India). [Pokorny trei- 1090. Watkins] [2]