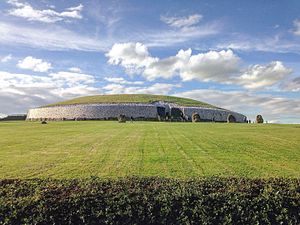 Newgrange is a prehistoric monument in County Meath, Ireland, located 8 kilometres (5.0 mi) west of Drogheda on the north side of the River Boyne. It is an exceptionally grand passage tomb built during the Neolithic period, around 3200 BC, making it older than Stonehenge and the Egyptian pyramids.

The site consists of a large circular mound with an inner stone passageway and chambers. Human bones and possible grave goods or votive offerings were found in these chambers. The mound has a retaining wall at the front, made mostly of white quartz cobblestones, and it is ringed by engraved kerbstones. Many of the larger stones of Newgrange are covered in megalithic art. The mound is also ringed by a stone circle. Some of the material that makes up the monument came from as far away as the Mournes and Wicklow Mountains. There is no agreement about what the site was used for, but it is believed that it had religious significance. Its entrance is aligned with the rising sun on the winter solstice, when sunlight shines through a 'roofbox' located above the passage entrance and floods the inner chamber. Several other passage tombs in Ireland are aligned with solstices and equinoxes, and Cairn G at Carrowkeel has a similar 'roofbox'. Newgrange also shares many similarities with other Neolithic constructions in Western Europe, especially Gavrinis in Brittany, which has both a similar preserved facing and large carved stones, in that case lining the passage within. Maeshowe in Orkney, Scotland, with a large high corbelled chamber, and Bryn Celli Ddu in Wales have also been compared to Newgrange.

It is the most famous monument within the Neolithic Brú na Bóinne complex, alongside the similar passage tomb mounds of Knowth and Dowth, and as such is a part of the Brú na Bóinne UNESCO World Heritage Site. There are many smaller archaeological sites such as henges, mounds and standing stones situated in the .75 km between Newgrange and the Boyne. Newgrange consists of approximately 200,000 tonnes of rock and other materials. It is 85 metres (279 ft) wide at its widest point. [1]

Newgrange contains various examples of graphic Neolithic rock art carved onto its stone surfaces. These carvings fit into ten categories, five of which are curvilinear (circles, spirals, arcs, serpentiniforms, and dot-in-circles) and the other five of which are rectilinear (chevrons, lozenges, radials, parallel lines, and offsets). They are marked by wide differences in style, the skill-level needed to produce them, and on how deeply carved they are. One of the most notable types of art at Newgrange are the triskele-like features found on the entrance stone. It is approximately three metres long and 1.2 metres high (10 ft long and 4 ft high), and about five tonnes in weight. It has been described as "one of the most famous stones in the entire repertory of megalithic art." Archaeologists believe that most of the carvings were produced prior to the stones being erected, although the entrance stone was carved in situ before the kerbstones were placed alongside it.

The Amethyst Dragon Kings hosted a pale magenta violet vertical pillar as support for the Cosmic Holy Father principle within the multidimensional layers of the Albion Lightbody. Amethyst Order hosted Kingship Arcs were anchored which brought the next stage of corrected Solar Masculine Christ and Solar Feminine Christ principle through Newgrange, Ireland, which is a Mother Arc Stargate. The 15:15:15 code pattern is the organic Christos alignment of the Solar Masculine Christos Rod architecture from the Rha God World Creation of The Amethyst Order Violet Flame Yanas and Ramyanas.[2] [3]