In the Guardian context, the Alta Major center is located at the base of the skull, where the neck meets the skull. This is considered the Thalamus Complex, the 9th morphogenetic chakra that directly corresponds to the medulla Oblongata and access into the Universal Antahkarana current. As a result of its placement in the head, it is also referred to as the Mouth of God or Goddess. This energy center in the lightbody directly regulates many aspects of brain and glandular function, and the circuitry connects into the hara center which represents the location where the monadic identity first anchors into the physical body.

In order to maintain connection and communication with the higher heart center located in the thymus gland, and to build the crystal lotus breath configuration within the Sacred Crystal Heart, the three main energy centers in the head must be linked together and then sustained. These three energy centers operate as a trinity and connect into three major brain glands; the hypothalamus, pituitary and pineal. The energetic circuitry links between them exist from on the top of the head, to the middle of the forehead or top middle hairline, and then to the base of the skull. This trinity circuit communicates with the monadic consciousness layers, bringing the communication vibration down into the body and then the spiritual blueprint pattern is spoken through the throat center and voice box. This trinity pattern circuitry allows conscious awareness of our deep heart expression to be brought into the earth realm, by bringing one’s personal spiritual mission or divine purpose into physical actualization.

The Alta Major center is an extremely sensitive portal of higher consciousness awareness which alerts us to the signature of negative energies, entities, or toxic influences in the environment. As a sensitive portal of consciousness that links directly into the brain and higher heart complex, it is highly susceptible to a range of implants, psychic attacks and misalignment. When the Alta Major center is misaligned, it interferes with brain function, heart centered communication and higher sensory perception. Blockages in the Alta neck center may result in an assortment of physical ailments and spiritual blockages, most importantly repelling full monadic embodiment and preventing the permanent seed activation in the higher heart complex from building out the crystal lotus and rose heart configurations.

The Alta Major center is connected to the Atlas bone or C1 which is the very first bone in the neck, it is a ring like bone at the junction of where the skull and neck meet. The Atlas bone supports the weight of the skull, has facets that allow the head to move up and down and is responsible for the equilibrium management of the spine. The second neck bone is called Axis or C2 which is just below the Atlas bone, which allows the head to move from side to side. Together, the Atlas and Axis bones are referred to as the upper cervical spine. The Atlas and Axis are important neurologically because the brain stem extends down to the axis, which controls and coordinates virtually all of our body's vital functions.

If this important junction is blocked, implanted, or misaligned, it blocks the Thalamus Complex and 9th Chakra opening which is the medulla spiritual gateway through which our monadic identity can embody, and our consciousness can gain access into higher dimensions. Most people on earth have been subjected to a variety of physical and emotional traumas which have contributed to the lodging of a variety of implants and suppressor energy parasites to prevent soul and monadic embodiment. This is directly related to the Atlas C1, Axis C2 dislocation at the back of the cranium and spine, along with complications caused from unremoved crucifixion implants. In my years of research and successfully removing these implants from my own body, it is believed that the Atlas and Axis dislocation is a part of the weakness created in the body that allows energy parasites to become more easily embedded, blocking the process of natural spiritual embodiment.

This is a general overlay, observed as an alien implant that has intentionally dislocated the Atlas-Axis and the source appears to be connected to the hidden history of Annunaki genetic manipulation on the earth as a result of the Luciferian Rebellion and Michael Wars. In some cases, people may have success with etheric session work or it may be helpful to undergo structural realignment through the physical treatment of an Atlas Adjustment.

The process of realignment is called the Atlas Adjustment and a qualified chiropractic practitioner uses a specific tool that came from Switzerland that is called the Profilax. This tool is like a little hammer that pounds reverberation on the back of the atlas to center the skull, foreman magnum hole, so the skeletal neck is perfectly balanced on top the spine. Naturally there is a lot of controversy around this procedure so this is something to deeply consider in that it requires inquiry, research and personal discernment.[1] 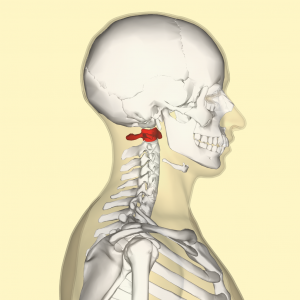 Position of the atlas (shown in red)

In anatomy, the atlas (C1) is the most superior (first) cervical vertebra of the spine. It is named for the Atlas of Greek mythology, because it supports the globe of the head which is the skull. The atlas is the topmost vertebra and with the axis forms the joint connecting the skull and spine. The atlas and axis are specialized to allow a greater range of motion than normal vertebrae. They are responsible for the nodding and rotation movements of the head.

The atlanto-occipital joint allows the head to nod up and down on the vertebral column. The dens acts as a pivot that allows the atlas and attached head to rotate on the axis, side to side. The atlas's chief peculiarity is that it has no body. It is ring-like and consists of an anterior and a posterior arch and two lateral masses. The atlas and axis are important neurologically because the brain stem extends down to the axis. [2]