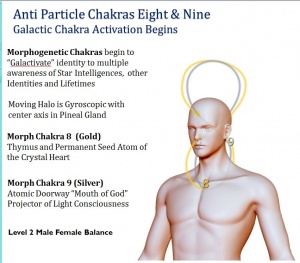 The Monad spirit body is entwined with the activation of the 8th Chakra located at the thymus gland. When the Permanent Seed Atom begins to activate the sequence of Monadic integration begins to link with the 9th Chakra in a moving gyroscopic field with its center axis in the pineal gland.[1]

The 9th Chakra has been referred to as the Mouth of God and its opening is exactly at the back of the neck where the skull lays on top of the spine. It connects to the Medulla Oblongata and the reticular formation of the brain and spinal cord as well as the Silver Cord in the Crown that connects to the Threefold Founder Flame. This area esoterically has been called the Golden Chalice for it is the Occipital Cup that holds the Cosmic Intelligence or Wisdom. It is a literal brain rewiring (spiritual body activation) in order to hold and be receptive to the "Golden Chalice" of Universal Knowledge which is transmitted through the Silver Cord in the Crown once Kundalini activation has taken place.

Many of us are becoming aware that we are being connected to another "language", another octave, another dimensional layer of accessing knowledge. There are waves of us accelerated into this spiritual body development of accessing Universal Knowledge from the Golden Chalice as it activates processes in the base of our brain. We may not comprehend it quite yet, as it involves a language of "code", "syntax" or "archetype". However our sensory faculties are aware of something that is changing the "field" and our relationships to everything in it.

This is the same 9D portal area of Guardian Planet Emancipation Projects rehabilitating the mental body fragments of the male/Family of Michael consciousness grids damaged by the Golden Eagle Grid and the Iran Gate.[2]

In order to maintain connection and communication with the higher heart center located in the thymus gland, and to build the crystal lotus breath configuration within the Sacred Crystal Heart, the three main energy centers in the head must be linked together and then sustained. These three energy centers operate as a trinity and connect into three major brain glands; the hypothalamus, pituitary and pineal. The energetic circuitry links between them exist from on the top of the head, to the middle of the forehead or top middle hairline, and then to the base of the skull. This trinity circuit communicates with the monadic consciousness layers, bringing the communication vibration down into the body and then the spiritual blueprint pattern is spoken through the throat center and voice box. This trinity pattern circuitry allows conscious awareness of our deep heart expression to be brought into the earth realm, by bringing one’s personal spiritual mission or divine purpose into physical actualization. [3]