The elemental re-encryption process of this Avatar of Ascension (AOA) project as a part of the Aurora Guardian Families is an adjustment that actually changes the coordinates of your “birth” blueprint and its genetic imprint on the flesh. An encryption is a set of vibrations that hold energetic intention. Every thought that a person has is an encryption that takes us closer to or further from alignment with God Source. The Aurora Re-encryptions is to return the divine blueprint that is encrypted in our Silicate Matrix as the Krystal Star or Christ Coding.

When we incarnated into 3D we had to accept huge miasmic package that is attached to the collective human mental bodies on this planet. These are called “Negative Forms” or “Shadow” or “Phantom Sun” bodies. These phantom bodies are what connect humans to the timeline of the (911) Alpha Omega Agenda or the negative alien agenda NAA. The transduction sequence is the definition of when the “God Spark” connects to the core manifestation body (12 Tree Grid) which projects out the elemental physical manifest body. As we know a major project of the AOA Aurora is to “re-encrypt” the elemental structure of our bodies, as well as anchor the architecture to build the unity source code platform. This changes the false 911 timeline architecture and is what the work of this community is in “laying” the template of the Law of One (LOO) Ascension Timeline.[1]

In terms of the Aurora, their mission and specific role in planetary support is to work with the new elemental command. This role is to re encrypt the physical body elemental matrix on atomic and subatomic levels. This is because the chemical constituents of our DNA is an elemental base, and our physical body is an elemental body that is comprised of the main four base level chemical constituents. We can use the four elements to help us understand the four levels of chemicals that comprise our current DNA makeup which is made up of the raw substances in the earth, fire, water and air elementals. These particle elements have gone through so much in the history of human evolution, suffering many miasmatic distortions that had been created on the planetary levels as a result of several cataclysmic events. As we are interfacing with the planetary body, it is our DNA makeup, we are making up the collective body of the planetary macrocosm. Humanity is holding the oneness of the entire planetary body as a group human soul, or Solar Body. Elementals of the human physical body are quite distorted in the cellular matrix because of the invasion, alien Breeding Programs and genetic manipulation histories, thus, the re encryption process was decided to be part of the mission upgrade of Ascension Plan B. Our human bodies are not transmuting the karmic and miasmatic base fast enough, the planetary Miasma, and this is required in order to move us through less dense frequency formats in order to handle the accelerated transmissions of Intergalactic Plasma Light frequencies. This is the primary reason that we are having the Aurora host this planet during the Ascension timeline. The Aurora have been working with many of us, consciously or not. The Aurora consciousness has a pale, white opaqueness saturated with many hues of colors, which may appear as pastel rainbow ribbons that look like cellophane, or individual colored orbs. [2] 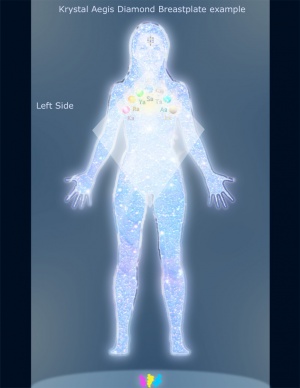 During certain phases of re-encryption, some with inner vision are able to sense or see that the lower chakra cones 2nd Chakra or lower areas of the body appear to be filled with the Aurora body colors, a type of pastel rainbow oscillating field. Ascension symptoms may include a flushing heat sensations or odd smells, burning, smoky smell emanating off the body, especially at the 9th Chakra (i.e. Mouth of God, Atomic Doorway and Medulla Oblongata), itchiness, creepy crawlies on the skin sensation or feeling.