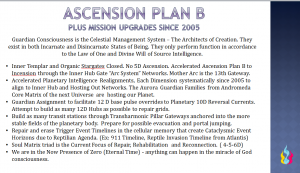 The original evolutionary schema or 5D Ascension Plan for the planet Earth has been aborted and replaced with evolution mission upgrades administrated by the Aurora Guardians and Krystal Star that we refer to as Ascension Plan B. My personal mission shifted to facilitate for the Aurora Guardians whom were supporting the impending shift of planetary hosting to Krystal Star at the end of the 2012 Timelines. This is also referred to as the end of the Ascension Cycle, Precession of the Equinoxes or the end of an Age of Humanity.

This original 5D Ascension plan was aborted by the Krystal Star Guardians, and councils disbanded and reassembled to work on the new mission upgrades, called Ascension Plan B. This was necessitated because of the damaged consciousness fields and their Timelines as a result of Alien Machinery, Dead Light and Bi-Wave Influences, and the NAA invasion of the planet, which created extensive damage from the bio-neurological Mind Control and Alien Implants used in the public and in the planet to enslave Consciousness.

From the combined result of multiple levels of damage to the architecture and low levels of participating Consciousness in the original Ascension Process, the result is Soul Fragmentation and disconnection of the human race from their spiritual source. Thus, making it very dangerous to open the inner Stargates of earth during the Ascension Cycle, that had become under the control of many of the NAA. For these and many other reasons, in order to protect the human genetics on earth, the original Ascension plan was aborted and alternatives in the management structures are in the process of being manifested. The Aurora Guardians and Krystal Star are working together with representatives on earth to build new Trinity Wave architecture to handle the plethora of consciousness issues, required transiting and repair the energetic damage made on the earth from Alien Machinery, False Ascension Matrix issues of recycling and static NETs.

The original 5D Ascension plan for humanity was the Stargate merge with the parallel harmonic universe to which our 3D reality of planet earth would unite with its counterpart in the parallel 5D reality, our planet in the future timelines. In the future Timelines planet earth is called planet Tara. This is not transpiring because the future timelines of earth were completely invaded by the extradimensionals of the NAA, making 5D Ascension impossible.

The Christos Sirian Blues, or Blue Dragons incarnated into this Harmonic Universe to help heal the DNA template of these fallen Dragon races. They came to work with bringing the Aurora Body to help repair the genetic mutations and to be the evolution safety net during the Ascension hosting cycle. These complex networks of the Aurora Portal Systems and Aurora hubs are the safety zone platforms brought to the earth in 3D as a part of Ascension Plan B.

Shifting to Ascension Plan B

Many times I am asked about what the difference is between 5D Ascension plan (the original evolutionary schema or Ascension plan for our planet) and the Ascension Mission Upgrade(s) which is known as Ascension Plan B.

Some Ascension Guides or 2012 Ending Calendar Presenters will say 5D Ascension because they do not have the language as of yet to describe what has changed in the collective Consciousness and the Timelines of earth. Some of this Ascension ground crew are working specifically to help those that were working for 5D Ascension to transition the Soul bodies to a higher level of participation in Expanding Consciousness within dimensionalized time. Naturally there is an NAA agenda to confuse, obfuscate and thwart that from happening. The NAA Reptilian preferred method is to create disinformation and confusion, so they can infiltrate and manipulate - they recruit Indigo's to go create followings to take the place of contractually trained Galactic Emissaries. The Founders and participating Krystal Star councils have training methods for Galactic Ascension work, and the first order of energetic self mastery is to overcome Mind Control, develop skill sets with dark arts training with Psychic Self Defense and have clear Self Awareness.

This is why so few of the human race has been able to move past the density of confusion and delusion in the Astral Plane, the technological Mind Control is incredibly destructive, making it nearly impossible to perceive reality with clarity, accuracy and balance. From the place of technological and socially based anti-human Mind Control, unhealed trauma, and emotional woundedness; we are then prime targets for Negative Aliens reptilian manipulation, thoughtform or spiritual possession. With inner discipline devoted to training the mind, there is still potential Imposter Spirit harassment, however one learns how to be free of psycho-Emotional Manipulation or any level of Imposter Spirit and dark Possession.

This is a snapshot of key points in the Ascension Plan B (Guardian perspective) of mission upgrades and awareness to apply the antidotes to artificial Mind Control impulses.

Our spiritual work at pretty much any level between you/me/we/I are at, is about returning to Inner Energetic Balance. We are receiving more tools for that task, and I hope this is supportive in that intention.[1]

Guardian Mission Upgrades since 2005 and ongoing.

Guardian Consciousness is the Celestial Management System – The Architects of Creation are from the next Universe called the Seven Higher Heavens. They exist in both Incarnate and Disincarnate States of Being in many multiple dimensions. They only perform function in accordance to the Law of One and Divine Will of Eternal Source Intelligence. They are the Original Progenitors of Krystal or Christ Consciousness and protectors of the GSF.

This is to remove the False Ascension Matrix (FAM) structure from governing the control of the future timelines for the Soul and further fragmenting the Monad bodies in the higher dimensions in phantom spaces. New timeline of choice began during the end of the Ascension Cycle on 12/21/2012 to transcend our 3D mental body (Negative Ego and Three Layers of Ego solar plexus and personality influences) and build enough Lightbody to sustain personal ascension hosting with Krystal Star. Mission upgrades are continually changing and updated. As of January 2013, we are sustained by planetary hosting through the Krystal Star. Rehabilitation of grid networks to an open source system and trinitized forms begins. HGS is given to the starseed public to begin to create energetic template for open source systems and architectural field repair of planet and human bodies. Read ES Monthly Newsletter or listen to Podcast free on ES Website for Ascension Plan B Timeline Information hosted by Krystal Star for the GSF Aurora Timeline Continuum. Members suggested revisiting ES monthly teleconferences since June 2009.

The next grid project focus is the necessity to bridge timelines that have been feeding off and replicating other false (destructive) timelines or stuck in the mire of massive superimposed artificial structures ( i.e. circulatory feeds and siphons) that are used by the Negative Alien Control groups. Once “Aurora Bridging” and Mother Arc trans-gateways are opened the false systems start to collapse and are unable to continue circulation feed of reversal polarity systems or other destructive circuits of energy. Without these reversal feeds circulating it releases many soul bodies that have been impaled for use in these systems as a battery source. One major focus of timeline repair is the False Ascension Matrices and the various 5D Ascension programs that have been feeding into these replicated and inorganic systems. Many of these inorganic systems are responsible for the reincarnation programs used on the low Astral Planes to recycle human souls. These inorganic systems must fail and are being dismantled at both levels of the human 3D programs and its 5D contact groups. These groups are also going into briefing and reassignment of their previous mission as this timeline has gone as far as it is possible.[2]

What is 3D Mind Control?

• Psycho-Tronic technology such as in EMF, Scalar Wave formats that have carrier waves of “Thought” Control programs or Specific Frequency to illicit an automatic Behavior, Emotional or Addictive state in the “Target”. There is also common use of artificial holograms used as inserts (audio & visual) to influence the thoughts and beliefs of the person(s). Mind controlled “Sleepers” are used to create chaos and confusion in the masses. (Bio-Neurological control of body functions and actions)

• “Target” is defined at multiple levels can be Military or Government personnel, Businesses, Mass Populace demographic areas, or Ego Maniacal World Leaders. Our entire Military is controlled by the N.A.A. (Black Ops and Shadow Government) Many if not all, Spiritual leaders are directly targeted for attempted infiltration, isolated and victimized for persecution and crucifixion.

• All Mind Control Technology Ultimately Serves Reptilian NAA Invasion Agenda. This is an Anti Human Agenda based in Patriarchal Domination to Enslavement. It exists as primary as the FAM control matrix in the Astral Plane and is further orchestrated in the Galactic planes by the Orion Groups and their consortium.

• Most Mind Control Technology and the FAM are harnessing the 3D Levels of Ego Intelligence though thought forms and belief systems. Understand this and you can transcend the Mind Control into reclaiming Personal Sovereignty and GSF.

• The 3D Global Mind Control Agenda has advanced considerably since November 2009. This is to stake the claim and dominate as many minds on the earth as possible. He, who controls the mind, controls the Soul. This is the NAA goal for total domination of humanity and this planet.

• How do we become FREE? One way is to discipline your mind through understanding your Lightbody’s function and it’s “Levels of Intelligence”.

Where do you get your thought forms and where do these beliefs source from? Are you an experiencer of direct knowing?

Learning about different levels of energetic intelligence increases the Neural Net and Energy Receivers to begin to perceive Multidimensionally. BEYOND MIND CONTROL SUPPRESSION YOU HAVE CHOICE.

EVERYTHING YOU NEED IS INSIDE YOU AND EVERY TOOL TO HELP YOU PRACTICE WHAT YOU KNOW FROM YOUR HEART IS HERE!

Why is 12 Tree Grid Important?

• To Discern which Thought Impulses source from Lower-Higher Self or Mind Control Agendas. This begins the process of training your mind to release and to become multidimensional. Learn to be Psycho-Emotionally Balanced to create a Centered Spiritual Self.

• To comprehend the Insidious Nature of Mind Control used in this 3D Realm and how it impacts your life, relationships and future.

• To Discern False New Age Channeling-Modalities or Presumed Authority that want to take your Power or Manipulate you through Lower Emotional States. Most New Age Material is infiltrated or hijacked, and does not discuss personal sovereignty and freedom.

• To Discern Emotional Manipulation at the many levels it’s perpetrated in your life and be free of its impact upon you.

• To Claim 100% Responsibility for your Thoughts and Emotional States through Personal Self Containment and Inner Energetic Sustainability. One ceases to be vampire through lower desires, needs and via controlling others.

• This develops your Inner Personal Power to Command Dominion within Your Personal Space. This begins the path to learning personal sovereignty over ones energies, and thus deters, deflects and prevents your spiritual energies from being consumed, used and stolen by others. (by human and nonhuman)

Therefore you cannot be mind controlled and your creations stolen from you.

Ascension Timeline for Consciousness Corridor: The time has come where the consciousness bifurcation on planet earth has necessitated additional evolutionary framework for servicing the wide spectrum of human consciousness through the Founder Guardian and Krystal Star planetary hosting. Krystal Star hosting means the reclamation of the Universal Laws and Principles which are the essential nature of the Cosmic Christ Consciousness which is built upon the 12 Strand DNA Silicate Matrix design. To rebuild the architecture of the Diamond Sun Body upon this earth and reassemble the holographic template of Christos-Sophia recorded throughout the past, present and future earth timelines, the Founder Guardians state the guidelines of the Cosmic Law Evolution Edict.