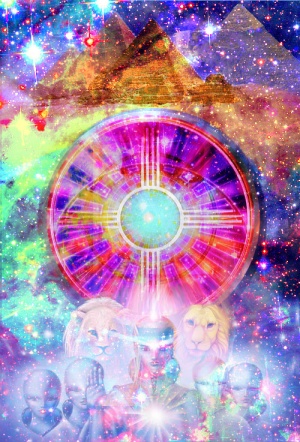 The Aurora Host Matrix is the Aurora Body located beyond the Universal Neutron Window and into the core of the Next Universe, the Seven Higher Heavens, or High Creational Realm in Andromeda. They are families of the Krystal Star, and bring to the earth plane the Aurora Elements which are also called the New Earth Elemental Command. They have answered the call from the Threefold Founder Flame represented in the Cosmic Triad of the GSF.

The Aurora mission is to work with the new elementals for the new earth. These are called the New Earth Elemental Command. This role is to help re-encrypt the human physical body on atomic and subatomic levels because the chemical constituents of our DNA is an elemental base. Our physical body is an elemental body and it’s comprised of these four base level chemical constituents. We can use the four elements to understand the four levels of chemicals that comprise our DNA which is earth/fire/water/air. Our human bodies are not transmuting fast enough the karmic base of Negative Form, the Miasma, that was needed in order to move us through less dense formats in order to handle the accelerated (frequency) energy. This is a primary reason that we are having the Aurora host this planet for the ascension timeline. Now with the re encryption of our particle base, as we are being re encrypted on an atomic level, our particles are being shifted and we are being upgraded into these new re encryption templates and modes to work with the new elemental command. This is to build the physical elemental form and Monadic form of our body back into the organic life force of our divine blueprint, the original human soul, the Christos blueprint a 12 strand DNA Silicate Matrix. This is also called the core manifestation template of the 12 Tree Grid. However, this is what the Aurora’s mission is - to build the planetary and individual particle base and re-encrypt us with its new coding. Our bodies are being upgraded beyond Carbon Atom base coding. [1]

Aurora Hosting Cycle Begins: The Morphogenetic Field structure of the planetary mathematical architecture has been coded to fully anchor the Krystal Star frequency presence along with running its “living” energetic current in the planetary brain or Planetary Logos. This has been generated from the constant work involved in the rehabilitation and recoding of the damaged planetary grids, which act as the central nervous system for the planet. There is still much more to do with resetting the planetary grids and the logos (brain) into compatible messaging for trinitized frequency formats. After a knock down, dragged out battle for the end game pieces in December, we emerged from the demolition of the flying dust particles in early January with ALL of those pieces. Those pieces began a re-assembly process that has been frenzied with many extra dimensional and multidimensional humans acting as conduits in the end game. This was to allow the Liquid Krystal Forces and current to wash through the many energetic tributaries, ley lines and meridians within the planetary consciousness field.

This event necessitates that we will continue to rebuild architecture ongoing from this month, as a part of the full Ascension Timeline available on the earth for the next thousand years. At the end of this root race consciousness cycle, the Guardians had been extracting Melchizedek hosting architecture and other fallen networks in the planetary consciousness grids. These various networks are systematically being recoded to the Avatar of Ascension, or Aurora Host. The Aurora Host and/or Krystal Star are the consciousness root race evolution cycle that we begin this month. The Aurora Body (luminaries from the next Universe) are the Ascending host consciousness for the new races evolving on planet earth.[2]