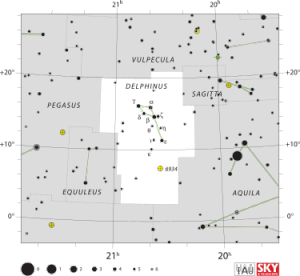 Delphinus is a constellation in the northern sky, close to the celestial equator. Its name is Latin for dolphin. Delphinus was one of the 48 constellations listed by the 2nd century astronomer Ptolemy, and it remains among the 88 modern constellations recognized by the International Astronomical Union. It is one of the smaller constellations, ranked 69th in size. Delphinus' brightest stars form a distinctive asterism that can easily be recognized. It is bordered (clockwise from north) by Vulpecula the fox, Sagitta the arrow, Aquila the eagle, Aquarius the water-carrier, Equuleus the foal and Pegasus (Constellation) the flying horse.[1]

Delphinus is associated with two stories from Greek mythology. According to the first Greek god Poseidon wanted to marry Amphitrite, a beautiful nereid. She, however, wanting to protect her virginity, fled to the Atlas mountains. Her suitor then sent out several searchers, among them a certain Delphinus. Delphinus accidentally stumbled upon her and was able to persuade Amphitrite to accept Poseidon's wooing. Out of gratitude the god placed the image of a dolphin among the stars. The second story tells of the Greek poet Arion of Lesbos (7th century BC), who was saved by a dolphin.[1] He was a court musician at the palace of Periander, ruler of Corinth. Arion had amassed a fortune during his travels to Sicily and Italy. On his way home from Tarentum his wealth caused the crew of his ship to conspire against him. Threatened with death, Arion asked to be granted a last wish which the crew granted: he wanted to sing a dirge.[7] This he did, and while doing so, flung himself into the sea. There, he was rescued by a dolphin which had been charmed by Arion's music. The dolphin carried Arion to the coast of Greece and left.[2]