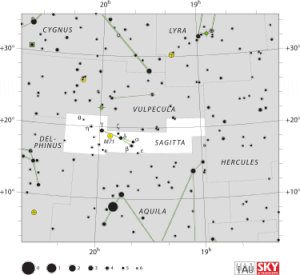 Sagitta is a constellation. Its name is Latin for "arrow", and it should not be confused with the larger constellation Sagittarius, the archer. Although Sagitta is an ancient constellation, it has no star brighter than 3rd magnitude and has the third-smallest area of all constellations (only Equuleus and Crux are smaller). It was included among the 48 constellations listed by the 2nd century astronomer Ptolemy, and it remains one of the 88 modern constellations defined by the International Astronomical Union. Located to the north of the equator, Sagitta can be seen from every location on Earth except within the Antarctic circle.Sagitta lies within the Milky Way and is bordered by the following constellations (beginning at the north and then continuing clockwise): the little fox Vulpecula, the mythological hero Hercules, the eagle Aquila and the dolphin Delphinus.The Greeks who may have originally identified this constellation called it Oistos. The Romans named it Sagitta.[1] 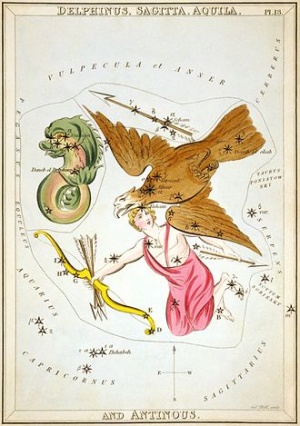 Sagitta's shape is reminiscent of an arrow, and many cultures have interpreted it thus, among them the Persians,[citation needed] Hebrews,[citation needed] Greeks andRomans. The Arabs called it as-Sahm, a name that was transferred Sham and now refers to α Sge only.Ancient Greece Sagitta can be seen above Aquila in this plate from Urania's Mirror (1825).In ancient Greece, Sagitta was regarded as the weapon that Hercules used to kill the eagle (Aquila) of Jove that perpetually gnawed Prometheus' liver. The Arrow is located beyond the north border of Aquila, the Eagle. Others believe the Arrow to be the one shot by Hercules towards the adjacent Stymphalian birds (6th labor) who had claws, beaks and wings of iron, and who lived on human flesh in the marshes of Arcadia - Aquila the Eagle and Cygnus the Swan, and the Vulture- and still lying between them, whence the title Herculea. Eratosthenes claimed it as the arrow with which Apollo exterminated the Cyclopes.[2]