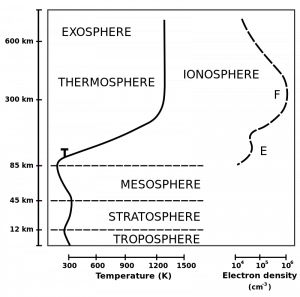 Relationship of the atmosphere and ionosphere

The Ionosphere is a region of Earth's upper atmosphere, from about 60 km (37 mi) to 1,000 km (620 mi) altitude, and includes the thermosphere and parts of the mesosphere and exosphere. It is ionized by solar radiation, plays an important part in atmospheric electricity and forms the inner edge of the Magnetosphere. It has practical importance because, among other functions, it influences radio propagation to distant places on the Earth.

Geophysically, the state of the ionospheric plasma may be described by four parameters: electron density, electron and ion temperature and, since several species of ions are present, ionic composition. Radio propagation, (the behavior of radio waves when they are transmitted, or propagated from one point on the Earth to another, or into various parts of the atmosphere) depends uniquely on electron density.

The ionosphere is a shell of electrons and electrically charged atoms and molecules that surrounds the Earth, stretching from a height of about 50 km (31 mi) to more than 1,000 km (620 mi). It owes its existence primarily to ultraviolet radiation from the Sun.

The lowest part of the Earth's atmosphere, the troposphere extends from the surface to about 10 km (6.2 mi). Above 10 km (6.2 mi) is the stratosphere, followed by the mesosphere. In the stratosphere incoming solar radiation creates the ozone layer. At heights of above 80 km (50 mi), in the thermosphere, the atmosphere is so thin that free electrons can exist for short periods of time before they are captured by a nearby positive ion. The number of these free electrons is sufficient to affect radio propagation. This portion of the atmosphere is ionized and contains a plasma which is referred to as the ionosphere. In a plasma, the negative free electrons and the positive ions are attracted to each other by the electrostatic force, but they are too energetic to stay fixed together in an electrically neutral molecule.

Ultraviolet (UV), X-ray and shorter wavelengths of solar radiation are ionizing, since photons at these frequencies contain sufficient energy to dislodge an electron from a neutral gas atom or molecule upon absorption. In this process the light electron obtains a high velocity so that the temperature of the created electronic gas is much higher (of the order of thousand K) than the one of ions and neutrals. The reverse process to ionization is recombination, in which a free electron is "captured" by a positive ion. Recombination occurs spontaneously, and causes the emission of a photon carrying away the energy produced upon recombination. As gas density increases at lower altitudes, the recombination process prevails, since the gas molecules and ions are closer together. The balance between these two processes determines the quantity of ionization present. Ionization depends primarily on the Sun and its activity. The amount of ionization in the ionosphere varies greatly with the amount of radiation received from the Sun. Thus there is a diurnal (time of day) effect and a seasonal effect. The local winter hemisphere is tipped away from the Sun, thus there is less received solar radiation. The activity of the Sun is associated with the sunspot cycle, with more radiation occurring with more sunspots. Radiation received also varies with geographical location (polar, auroral zones, mid-latitudes, and equatorial regions). There are also mechanisms that disturb the ionosphere and decrease the ionization. There are disturbances such as solar flares and the associated release of charged particles into the solar wind which reaches the Earth and interacts with its geomagnetic field.[1]

The recent transmissions were a momentous event that has stabilized a different ratio of particle charge to the magnetic field layer, within our planetary ionosphere. The Ionosphere is the uppermost part of the planet’s atmosphere, distinguished because it is ionized by solar radiation. The Ionization levels depend primarily on the Sun and its activity. The amount of ionization in the ionosphere varies greatly with the amount of radiation received from the sun. We have recently had unprecedented massive solar flare activity and this is the associated release of charged particles into the solar wind, which reaches the Earth and interacts with its geomagnetic field. Ionization is the physical process of converting an atom or molecule into an ion, by adding or removing charged particles such as electrons or other ions. [2]

The solar streams in the form of solar winds enter the Magnetosphere which is located in the ultraviolet layer of the Ionosphere and directly control the planet’s internal magnetic field, which is currently being reconfigured into organic states of magnetism.[3]