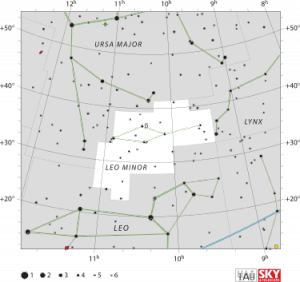 Leo Minor is a small and faint constellation in the northern celestial hemisphere. Its name is Latin for "the smaller lion", in contrast to Leo, the larger lion. It lies between the larger and more recognizable Ursa Major to the north and Leo to the south. Leo Minor was not regarded as a separate constellation by classical astronomers; it was designated by Johannes Hevelius in 1687. There are 37 stars brighter than apparent magnitude 6.5 in the constellation; three are brighter than magnitude 4.5. 46 Leonis Minoris, an orange giant of magnitude 3.8, is located some 95 light-years from Earth. At magnitude 4.4, Beta Leonis Minoris is the second brightest star and the only one in the constellation with a Bayer designation. It is a binary star, the brighter component of which is an orange giant and the fainter a yellow-white main sequence star. The third brightest star is 21 Leonis Minoris, a rapidly rotating white main-sequence star of average magnitude 4.5. The constellation also includes two stars with planetary systems, two pairs of interacting galaxies, and the unique deep-sky object Hanny's Voorwerp.

A dark area of the sky with a triangle of brighter stars just visible to the naked eye in good conditions, Leo Minor has been described by Patrick Moore as having "dubious claims to a separate identity". It is a small constellation bordered by Ursa Major to the north, Lynx to the west,Leo to the south, and touching the corner of Cancer to the southwest.