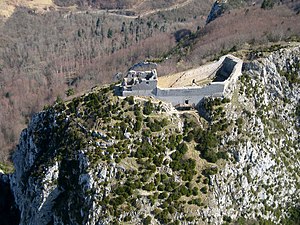 The Château de Montségur (English: Castle of Montsegur; Languedocien: Castèl de Montsegur) is a former fortress near Montségur, a commune in the Ariège department in southern France. Its ruins are the site of a razed stronghold of the Cathars. The present fortress on the site, though described as one of the "Cathar castles," is actually of a later period. It has been listed as a monument historique by the French Ministry of Culture since 1862.

The ruins of Montségur are perched at a precarious 1,200 metres (3,900 ft) altitude in the south of France near the Pyrenees. Located in the heart of France's Languedoc-Occitanie regions, 80 km (50 mi) southwest of Carcassonne, Montségur dominates a rock formation known as a pog — a term derived from the Languedocien dialect of Occitan — puòg or puèg, meaning "peak, hill, mountain." The top of the ruin is reached by a path and is 170m above the road.

In about 1204, Raymond de Péreille, one of the two lords of Montségur, the other being his cousin Pierre-Roger de Mirepoix, decided to rebuild the castle that had been in ruins for 40 years or more. Refortified, the castle became a center of Cathar activities, and home to Guilhabert de Castres, a Cathar theologian and bishop. In 1233 the site became "the seat and head" (domicilium et caput) of the Cathar Church. It has been estimated that the fortified site housed about 500 people when in 1241, Raymond VII besieged Montsegur without success. The murder of representatives of the inquisition by about fifty men from Montsegur and faidits at Avignonet on May 28, 1242, was the trigger for the final military expedition to conquer the castle, the siege of Montségur.

In 1242 Hugues de Arcis led the military command of about 10,000 royal troops against the castle that was held by about 100 fighters and was home to 211 Perfects (who were pacifists and did not fight) and civilian refugees. The siege lasted nine months, until in March 1244, the castle finally surrendered. Approximately 220 Cathars were burned en masse in a bonfire at the foot of the pog when they refused to renounce their faith. Some 25 actually took the ultimate Cathar vow of consolamentum perfecti in the two weeks before the final surrender.

In the days prior to the fall of the fortress, several Cathars allegedly slipped through the besiegers' lines. This led to legends that they escaped with a secret treasure or esoteric knowledge. In 1906, esoteric French writer Joséphin Péladan proposed that the treasure was really the Holy Grail, arguing that Montségur was the Munsalväsche (or Montsalvat) of Wolfram von Eschenbach's 13th-century Grail romance Parzival. [1]