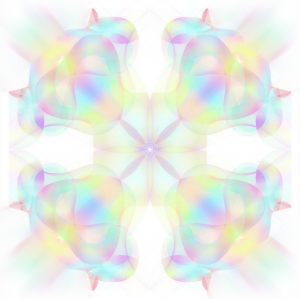 The Starseed and Indigo Races family have come to this planet to work specifically with healing the planetary and human miasma by rehabilitating DNA tones, working in the Timelines, healing or ejecting dead light Miasma and their causal implants. This function makes up for a large part of the clearing and transmuting work within the collective Light family. Our groups have been able to transmute enough miasma, in partnership with the Celestial Management Structure, The Guardians, by running 12D Hubs and Threefold Founder Flame Rainbow Rounds in the earth grid, to stabilize the earth core to prepare to release this quarantine, on schedule with the Venus Transit [2012].

These dead strings create pools of static dead energy. Dead Energy spaces collect into the Phantom Matrix, and like a waste product, this cycles into generating more black layers of planetary body miasma.[1]

Rainbow Round Tables or Kunda-Ray

Within the energy matrix God source expresses first as sound in the form of the Kunda-Ray living sound field current. From within the Kunda-Ray, the living light rays of the Universal Trinity are formed, what we refer to as the Threefold Founder Flame of the Solar Rishi or Breneau. The Solar Rishi have returned into dimensionalization to directly support the Guardian races with running assorted Kunda-Ray currents into the planetary grid system during the planetary emancipation cycle.

Esoterically, the term running the Rainbow Rounds or the rainbow round table refers to the running of the Diamond Sun rainbow current or Kunda-Ray into the planetary stargates and earth grid to restore balance and harmony throughout the planetary systems. To protect the earth, the Christos Knights Templar would go to planetary stargates and power centers with planetary geomatic structures and etheric light temples and communicate with the Krystic forces and then be shown where to run the “Round Table”. This refers to three to twelve Templars gathering at the stargate location or geomantic center power grid in order to run Kunda-Ray rainbow current and protect that area from intrusion at multidimensional levels. Transmission of the Kunda-ray current into the planetary grid supports the harmonization of the planet to restore the Christos frequencies and align to the organic timelines of planetary ascension.

Once all nine dimensions of Kundalini frequency are activated in the human lightbody and unified in the heart, activation into the liquid plasmic light commences activating the Christos Avatar consciousness into the higher rainbow fields known as Kunda-Ray. In this next phase, running the rainbow round tables and installing Kingship Arcs and Holy Father Cosmic Rod and Staff pillars are designed to support the awakening of the Albion which catalyzes the global awakening and disclosure timeline.[2]

The current stages of the awakening Albion are revealing the activated lightbody of the planet into the Solar Logos initiation in which the Holy Father Solar Rishi aspect finally awakens the sleeping King Arthur, in order to express the Christos divine masculine in his warrior archetype through the compassionate action required to return benevolent Kingship into the realm. The Albion holds the most important key in comprehending the purpose of human consciousness evolution and spiritual ascension in order to become an initiated Cosmic Christ, anointed by the Holy Father and Holy Mother in order to express their divine will and be embodied as God-Sovereign-Free. The knowledge and alchemy held within the Albion’s alembic chamber to co-create the Cosmic Christos intelligence via Rainbow Rounds of liquid plasma light, is the key in understanding humanity’s divine purpose and ultimate mission upon the Earth. The awakening Albion and Rise of Arthur to find his beloved counterpart, the Triple Solar Goddess Guinevere (Brigid), Meri-Scotia and Mary Sophia, informs us how humanity was seeded here from the stars in twin aspects, and why the divine mind of God has chosen to express in this manner.