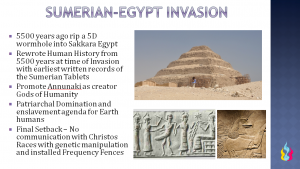 The Final Setback in the Negative Alien Invasion of the planet earth. This is the point in our current historical record where the human DNA was unplugged and all Galactic Wars memories and our true origins were erased form our memories by the NAA races.

The most current issues facing humanity now is that these Negative Aliens have rewrote Human History from 5,500 years ago at time of Invasion in Sumeria-Egypt and instituted a Mind Control plan for Patriarchal Domination and continued enslavement agenda for all Earth humans.

Using Humans to write the Bible as the source of religious Mind Control from the Jehovian Annunaki, the Patriarchal Domination and enslavement agenda for theArmageddon Software and Crucifixion Implants are put into the Planetary Logos which is the planetary brain at the 7D level of the magnetosphere. Alien Machinery is installed in the planet via Holographic Inserts of NAA Alien Technology to project Mind Control Archetypes and self enforced enslavement of humanity.

The Draconians from the Orion Group infiltrate the the Church of Rome and use the Crucified Christ Figure of SRA and the False Father God Religion of Jehovah to perpetrate the greatest spiritual abuse of human beings. A psychological and spiritual warfare is waged against humanity in the form of technological Mind Control that uses brainwashing through Religious Fears, Persecution based upon Cataclysm, Terrorism and Pestilence wielded by Reptilians to torment humanity into submission of enslavement. The Armageddon story in the Revelation of the christian bible is based on the Atlantian Cataclysm and is a Reptilian Software to torment humans from their cellular memories of Atlantis and Lemuria that were erased in Conscious Mind and collective race mind in the Soul Matrix.[2]

Sumerian Invasion is listed in the HGS Manual under the Fragments clearing under Fragment Influences (RRO) Historical Timeline Trigger Events. [3]