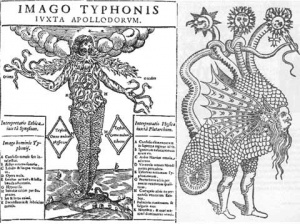 The Typhonian Order, previously known as the Typhonian Ordo Templi Orientis (TOTO), is a self-initiatory magical order based in the United Kingdom that focuses on magickal and typhonian concepts. It was originally led by British occultist Kenneth Grant (1924–2011) and his partner Steffi Grant, and is now believed to be led by their deputy Michael Staley.[1]

The Typhonian tradition is sometimes defined as a current that flows through the cosmology of the Order Templi Orientis (O. T. O.) established and made famous by Aleister Crowley. Typhon was the god in Greek mythology who when appearing before the other gods was so ugly he changed into a fire-eating monster; he waged a terrible war and was eventually killed by one of Zeus' thunderbolts. Thus, Typhonian is synonymous with fire and force, also means the Opposer. Typhon's Egyptian counterpart is Set or Seth. Excerpt from Bill Schoebelen: "Most Witches, myself included, find it necessary to study his material and “plug themselves into” the magical current of Crowley's demon spirit guide, a mysterious being named Aiwass. Aiwass is another name for Set, an Egyptian god. Sodomy is especially sacred to Set. It opens what are called the Typhonion” tunnels, channels through which extremely powerful demons, like the horrible Choronzon, can travel from the alternate reality and emerge into this universe and enter the sex partner's body. Sex (especially lustful and disconnected sex) is a major way in which demonic oppression can be passed from one person to another." —[2]

According to Kenneth Grant, a leading exponent of this Typhonian Tradition,and head of the Ordo Templi Orientis (a magical organization that was once headed by the one and only Aleister Crowley) this tradition is part of a current of magical force and occult lore dating back to Sumeria and pre-Dynastic Egypt. ( See Sumerian-Egypt Invasion) Originally known as the Draconian Tradition (Orion Group) it is a magical current “based on initiated knowledge or gnosis of the Fire Snake.” The Fire Snake is also known as the Kundalini or the Ophidian Current; the basis of all true initiation.

Who is Typhon? According to Mr. Grant, Typhon is “The feminine aspect of Set; sometimes typified as the Mother of Set in her role of Goddess of the Seven Stars, of which Set is the Eighth.” Set is the brother of Osiris in the Egyptian Pantheon. Set, Osiris’ dark brother, chopped Osiris up into many pieces, leaving him for dead. Set was also the prototype for Satan. Grant writes, “The word Set or Sut, means ‘black’. This indicates not only the generative nature of this god but also his association with the night-world, Amenta, for from being a god of the heavens Set fell beneath the horizon and was recognized in later mythologies as the Lord of Hell, the Hidden Land.This god (i.e. Set, Satanism) is of supreme importance in Crowley’s Cult, being not only the name of the primal creative spirit but also the formula of sexual magick.”[3]

"The Qlippoth are denizens of the back side of the Tree of Life, this is also called the Black Tree of Life. This back side or dark side is behind the regular Sephiroth of the Qabalah. They are said to be the shells or the black husks of the dayside of the Tree. But according to Kenneth Grant they are actually the first, primal manifestation of all things. In terms of Lovcraftian lore they are the Ancient Ones or Great Old Ones of the Necronomicon. They are the first primal void of Nothing before there was something. They have been considered evil by Qabalists and Occultists for centuries only because they represent the terrible blackness of the void and the complete destruction of what we understand as ego, which seems horrific to us. These Qlippoth reside in what is known as the Tunnels of Set. These Tunnels are behind or beneath the Day Side of the Tree of Life as the Nephilim reside beneath the earth. As terrifying as these “beings” may seem, Grant says they are here to enlighten us, as the Nephilim were. Why is the abode of these beings called the Tunnels of Set? Grant writes; “Of Set, because Set is the Seat of the powers manifest as the Tree of Life.” This is what is known as the Typhonian Tradition that Kenneth Grant speaks of.

(LR Comment: Clearly, Mr. Grant had no idea the NAA used him as a mind controlled possession to further spread Satanic forces to posses and control human beings on earth and in the afterlife. Possession by Satanic or Luciferian forces is not gaining spiritual truth, it is temporary ego gratification of earthly power to gain knowledge in the deliberate sell out of your eternal soul. These NAA entities are deceivers, liars and corrupters that promise these people immortality and give them power on the earth so they can cull more people to siphon, bind and possess in their groups. Immortality as a possessed and bound being to Satanic forces - this is not sovereignty, it is spiritual enslavement and feeding energy to the invaders.)

The Universal Shadow World emerged from out of the reversal current of the 11th dimension, in which these fallen black hole entities were reconfigured into Black Dragon Avatar Collectives with AI brains, and these bizarre shadow creatures became the entity attachments to living beings, at individual, collective and beyond levels. These Black Dragon Avatar Collectives use advanced artificial intelligence antichrist technologies to drain life force energy out of our Universe, and are able to hijack and possess living beings that are consumed by their unhealed shadow body. Upon the production of the Beast Machine and the Black Dragon Avatar Collectives in the 11th dimension, they descended through each dimensional layer via inorganic wormholes or architecture that generated Typhon Tunnels. Upon manifestation into the lower dimensions, this generated more shadow mutations that led to the proliferation of corrupted elementals, shadow creatures and astral mirrors which generate false images, negative form artifacts and conjured entity attachments. [4]

Thuban's Role in Hijack of Typhon

Orion Group linked Thuban controlled AI architecture into the planetary mind and the stargate systems, and this infiltration began the hijack of organic stargates. This was achieved through the building out of alien machinery designed for anti-life inversions that promoted satanic blood ritual and AI run Black Magic sorcery throughout the Planetary Grid Network.

Thus, humanity through the Egyptian world culture at the time of invasion were taught to worship Thuban as sacred to Set or Typhon, which is synonymous with the use of fire as an aggressive force of weaponry to represent those whom are Opposers of God. This Egypt timeline is worshipped by the controlling power elites, as they believe this is when their Gods were on the planet and put them in charge, to rule Earth for their personal pleasure and on behalf of their Alien God Masters. As the global human culture was systematically invaded, every wisdom teaching was stolen and hijacked, every natural spiritual ritual was infected with Blood Sacrifice, Black Magic or blood cult worship. Through this systematic process those who participated in blood rituals would emerge to be the preferred bloodlines and were rewarded with immense power, wealth and protection from their enemies. Then came the conditioning of Sexual Misery programs in which sexual perversions and gender reversals would be practiced in the context of sexual blood magick to please these Alien Gods, while its inherent design was loosh harvesting and to invert and destroy the male and female balance in the world.

Sodomy and anything connected to the rectum or feces is sacred to Set or Typhon. Thus, sodomy was introduced in blood rituals in order to generate Typhon Tunnels, this is used to reverse life force from its natural direction and channel powerful demons aka Alpha Draconis Black Sun entities into the material plane. The Typhonian tradition is sometimes defined as a current that flows through the cosmology of the Order Templi Orientis (O.T.O.), established and made famous in current times by Aleister Crowley. The OTO rebranded Typhon as the feminine aspect of Set, in which this aspect of Alien Dark Mother became of supreme importance in the formula of sexual blood magick, designed to hijack the Founder’s Christos-Sophia Rose lineages and to produce demonically enhanced moon children rituals in its place.[5]