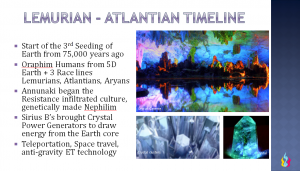 Nephilim (genetic hybrid between Oraphim and Reptilian) are easy to possess and Mind Control for their NAA negative alien agenda.[1]

During the end of the 2nd Seeding the Annunaki started breeding with Humans and a race called NEPHILIM was created. Many of these Nephilim creations were from the kidnap, rape and forced breeding with the human women of the earth. This was not agreed upon, to genetically tamper with the human race and the Elohim would not let this race walk on or be on the Earth. This created a Conflict and another War broke out. This created the war with the Annunaki and other Annunaki sympathizers, such as the Dracs and Sirian Annunaki Hybrids. The Nephilim Wars ended this seeding attempt and we reorganized for the next Evolutionary Round, where the Luciferian Rebellion occurred in the Atlantian Cataclysm timelines.

Many of the Nephilim were destroyed on the earth and their fragmented consciousness became enmeshed with the lower demonic spirits of the dense levels of earth matter. Some of these entities bound to the earth became known as the Watchers, and comprise of both Nephilim and Fallen Angelic fragments.

Annunaki Human Hybrids including the Nephilim. Originally from Sirian and Pleiadian Constellations, who then became wanderers. Have 9-10-11 DNA strands. This created planetary DNA mutations and wars over genetics. Control hub is in the UK. Agenda - to enslave humans. Belial Suns are Luciferian forces and are considered a part of the Fallen Angelics hierarchy.

The Controllers handpicked the hybridized Nephilim bloodlines that they could corrupt through the Mind Control programs in order to carry out their "enslavement through tyranny" agenda. (This does not mean that all Nephilim bloodlines are corrupted, it means they are hybridized genetic beings that have been perpetrated upon, to be recruited as the enforcers of the negative alien agenda NAA.)[2]

The Nephilim Reversal Grid (NRG) has been active in the United Kingdom since the Nephilim Wars. In order to dismantle the NRG, the various hubs feeding it from all over the planet need to be dismantled systematically, while freeing the soul enslavement used to power these grids. This has been transpiring in the Guardian teams since my awareness of them in 2008.The NRG is responsible to break apart hybrid genetics by reversing any synthesis of alchemy that happens organically between the male and female principle (electron-proton balance), as well as repelling any healing for reptilian based genetics. This is desired by the Reptilians because their human representatives that are bred as Nephilim (genetic hybrid between Oraphim and Reptilians) are easy to possess and Mind Control for their negative alien agenda NAA. The Reptilians do not want to heal and thereby integrate into human society as an equal, they want to rule it as an absolute authority in the Archontic Deception Behavior enforced by the False King of Tyranny).[3]

Wormwood refers to the Niburian Anunnaki’s artificially created battlestar that exists on the counter orbit to the Nibiru planet in our solar system. The alien architecture leeches onto the former body parts of exploded Tiamat which exists as phantom body and is the Phantom Matrix wormhole of Tiamat. The Nibiru Battlestar was formed from the exploded parts of Maldek.