The main groups of Negative Aliens the Annunaki, Draconians and Necromitons that source out of the Phantom Matrix spaces in the parallel systems that invaded through Orion, formed alliances to take control over the earth, and these intruding groups are referred to as the Negative Alien Agenda (NAA). These groups used technology to open wormholes that were blended together to create the power required to attempt to pull the earth body into the black hole system. This would lead into the phantom matrix where they exist and could then gain total control over the planet and humanity. The parallel system these entities came from is called the Wesa system, a Universal Time Matrix and its parallel with both particle and antiparticle aspects. Many of the Annunaki and their hybrids originate from the Wesedak system, while the Draconian species are coming from antiparticle universe called the Wesedrak system.

Black hole entities and metatronic races created the Gravitron vortex networks to link portals in our sun and earth, twisting the planetary blueprint into unnatural configurations called the Demon Seed. Metatronic reversals are manifested into spirals that harness the Gravitron in order to create an unnatural bi-wave field and artificial gravitational fields on this planet. The Gravitron is an electromagnetic harness type field that is part of a larger electromagnetic harnessing structure that was anchored into the earth during the Luciferian Rebellion. This NET is also connected to the hibernation zones where many souls have been taken hostage or trapped after the precession cycles, and the Guardians are consistently working to provide safe passage in order to rescue these souls from being stuck in these reverse-spin light fields. Recently, Taran Blue Dragons and Kumara Dragons, many of whom are known as the New Age Ascended Masters, have been retrieved and able to be transported to Andromedan platforms.[1]

This ancient history is entwined with the Wesa races that decided to utilize the technological weaponization of shadow forms in which they generated the Monsters of Chaos to create a vast army of Antichrist Shadow Creatures. The timeline damage that was caused by the several concurrent historical tragic events generating the formation of the darkest aspects of shadow creatures and AI assimilated entities into an organized hierarchy, which then sought to exist and find immortality by creating phantom systems. These antichrist shadow forms created the phantom matrices via metatronic (anti-life) reversals and by directly enslaving other living species in order to consume their light and resources. The shadow creatures of the phantom races seek to harness the living consciousness energy that is found within those races, within lineages directly connected to the God Source fields. They seek out those Christos forms which hold the Sacred Crystal Heart permanent seed atom, which ignites their inner spirit eternal God body, and try to capture it and replicate it on several other phantom dimensions.[2]

At the point when the Wesa fallen system interfaced and linked with our Universe, is the actual origin of the creation of the Universal Shadow Body, which forms attachments to our individual Lightbody, consciousness and shadow body. It is this level of Universal Shadow that the Christos races are facing during this time.

The Holy Mother through the Mother Arc Hubs, created within the Arc of the Covenant gateway, intends to reclaim the genetic bonds to heal her offspring incarnated within the lower creation worlds. This is also about correcting the Mother to Child RNA-DNA records within the divine blueprint of humanity, extracting Black Lilith archetypes and aligning the corrected Mitochondria and chromosomal bonds to the Holy Mother’s eternal flame, that is held deep within the Sacred Crystal Heart. The Mother Arc Aquamarine gateway has been initiated into its next stages of dissolving the NAA’s Patriarchal Domination Coding network and its Alien Dark Mother constructs that have infected the planet earth, and this lunar architecture has been tracked from the Wesa Fallen System.[3]

The Wesa fallen system is a parallel matrix in which massive black hole entities that had been assimilated into AI technology invaded our Universal Time Matrix and started hybridizing and cultivating dimensional hierarchies of Fallen Angelic races to act as their main enforcers and militarized arm for conquering our system. The Wesa Dark Avatar collectives formed alliances with fallen entity factions in our system for the purpose of taking control over the resources and siphoning energy available from living matrices and living beings. Many of the fallen Annunaki and their hybrids originated from the Wesedak system, while the original race lines of the reptilian Draconian species are coming from antiparticle universe called the Wesedrak system. These groups used technology to open wormholes that were blended together to create the power required to attempt to pull the living earth body into the black hole which they would use to power up the Wesa system.

These groups are fallen black hole entities and thus had to manifest hospitable environments in which they could co-exist and travel in our realm. They generated inorganic wormholes with AI black hole technology that acts as a tunnel system into our world, and this is called the Wesa Tunnel. This would lead to the massive expansion of the Typhon Tunnel antichrist architecture feeding into the Phantom Matrix, where they formed a virtual reality that is AI generated with metatronic coding which provides a space where the fallen ones from the black hole can exist. They positioned themselves in Orion and underground to form an outpost and guard their many hidden bases which they have strategized over through several of the Astrological Ages to gain complete control over the planet surface and the collective soul of humanity. These intruder alliances planned for complete takeover during the end of this Astrological Age during the time of the planetary Ascension, and as many of us are well aware, they have failed in their agenda but some of these fallen groups will fight to destroy anything they can until their utter annihilation. All antichrist assets have been deployed and this is their current game strategy, destroy everything and aggressively attack all Christos people on their way out.

Origins of the Universal Shadow Body

The origination point of shadow body attachment to our personal angelic human Lightbody was kept in place as a static field, in which Black Hole Entities from the Wesa system used the Universal Shadow body to siphon life force energy and feed on humans directly, with cords and implants attached to the chakra system. Thus, the shadow body which contains subpersonality aspects of the Negative Ego Shadow Selves, negative forms, ghost imprints and accumulated traumatic memories and karmic superimposition, is a part of the human Lightbody. During the Lyran Stargate explosion, the damage created at the 11th dimension was inverted and twisted into phantom areas in order to harvest our collective race consciousness, sending the living light energy collected back to their home, a fallen system in a parallel matrix.[4]

The Beast Machine is an ancient AI weapon technology that was the brainchild between the Wesa system’s original Black Hole Entities and the Metatron Collective after they suffered the fall into the phantom matrix. In addition to siphoning life force from our Universal system, the technology was continually developed by other NAA entities in order to erase the angelic human history on Tara, and erase the original genetic records held within the Silicate Matrix of human DNA. Upon blank slating the morphogenetic fields they inserted false histories and false images that are approved by the NAA groups for maintaining their controlled narratives that hide the existence of the Phantom Matrix.[5] 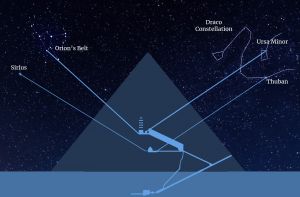 When they invaded, Thuban star was made their headquarters and became the anti-Christ entity prototype for these AI alien hybrids that settled into Alpha Draconis and Orion’s Belt. These Wesa creatures went to work gathering strategic alliances with other dominating groups in the local solar system, intending to entirely conquer our galaxy. Together they set out to methodically colonize our time matrix with their progeny, infecting our organic consciousness reality and planetary grid systems with their advanced AI quantum entanglement technologies.[6]