The concept of Architecture is defined in very limited and conflicting ways in the 3D world, which makes it difficult to describe the vast scope of its deeper meaning in impacting Consciousness, and how it greatly influences the mental framework of beliefs that we have come to think of as the nature of reality. Anything that has manifested into a physical form also has an instruction set in the unmanifested layers, this is a form holding Blueprint that stores information for how that consciousness energy will manifest. This is the definition of an energy architecture that is comprised of templates of conscious light and sound which serve as the blueprint of design for an intention, a concept or living thought crystal. Living Thought Crystals are complex creation intentions that hold multiple layers of architectural design that project holograms for the individuation of attention, for the purpose of consciousness experiences within a creation point. Our accumulated personal thoughts are recorded and inform the thought crystal in the projection of our personal hologram, which informs our experience in matter. Also, there are Universal Laws governing the living thought crystals that hold the architectural design in all structures and forms, which exist at both energetic levels as pre-matter forms and at the physical levels in the matter realm. The Law of Structure informs the way systems of energy are governed to operate within a dimensional level. Dimensions are full frequency bands of flashing energy waves built in layers of manifestation templates, reflecting an energy architecture design. When we better understand the Law of Structure, we can cooperate with these laws which helps us to avoid excessive dark interference in our manifestations, and to co-create a more aligned and positive outcome for ourselves.

Architecture exists in the manifest and unmanifest realms for every single physical thing in the material realm, which has been designed by an architect, the creator of the design. This instruction set extends throughout creation points into all domains of life in the natural earth kingdoms, spanning all dimensions and species, such as informing the consciousness of minerals, plants, animals and humanity.

As has been discussed, the NAA attempted to hijack the planetary instruction set for their explicit use, in order to become the superimposed creator of design via anti-Christ agendas such as alien hybridization and experiments with genetic engineering. They decided to gain control by superimposing themselves as the architects of earth by designing a genetically modified humanity. Essentially taking the power of self-determination and conscious co-creation away from humanity by controlling their minds and implanting thoughts. Their contempt for the Krist Code extends to a level of hatred and enemy patterning, intending to impose agony on any human being that would represent the Christos-Sophia. One of their main methods can be described as exposing the earth to mass levels of Satanic Ritual Abuse practices. It is important to realize that there is an architecture for anti-Christ entities to perpetuate and spread the Death Culture of Satanism, and there is an architecture for Krist-Krystallah, which perpetuates consciousness freedom and opens the direct spiritual connection with all of life and the eternal God Source.

In the 3D material world, architecture is a general term used to describe the model of design contained in a Blueprint that is built layer by layer into the physical structures, like buildings and infrastructure that we can see around us. The visible product of architecture in the material realm extends into the knowledge of designing and the process of constructing buildings and similar structures that become the cultural symbols for perpetuating a value system and way of life.

It is the end product of architectural design that has formed the physical structures, the housing and modern art that inform our cultural society, our communities, cities and our way of life interacting with each other and the earth. Buildings and edifices are structures with a foundation, walls and roof, which come in many shapes, sizes and functions. They have been adapted to serve the current accepted societal needs, are designed as a shelter and human habitat based on the current cultural values. Human culture or the values we have been shaped to accept as a society are reflected in the architectural design and physical structures that we are surrounded by, which further shape our mentality and attitudes in what co-creates the nature of reality we experience. Architecture is both a science and an artform, it is the expression of consciousness within a concept, intent and thoughtform that is built within a structure. It is the expression of thought contained in a building or in any physical thing. When we look at any structure, we should also look to sense the energetic architecture that exists behind the structure, to discern the motivations and consciousness of the architect or designer. By reverse engineering all structures, by thinking of them as first being an energetic architecture, we are able to sense many feelings and impressions that inform us of the deeper motivations and the actual purpose behind that physical structure.

For a moment, think about the day to day environment you live in and the architectural design of the city planning, such as the buildings, residences and structures, the way of life organized around you. What kind of feelings do you have when you look at a certain building, residence, infrastructure or even public art installation? How do you feel when you are in the building or area that you work in every day? How can it be that we have created a society of suffering filled with thousands of homeless people, hungry and unloved children? How does it feel to know that this suffering is by intentional design of anti-Christ architecture used to create slavery and spread satanism on the earth, and that consciousness is being intentionally perpetuated by the Controllers? Then imagine what it would look and feel like to live in the day to day environment of a humanitarian based Krystic architecture and Golden City. An environment that honored each person’s inner spirit and supported consciousness growth, creativity, the gaining of knowledge and personal development, allowing people to express their true selves. Holding each person as an important, unique and valued individual in the whole of the community, with a sense of belonging and meaningful connection. What would that architecture look and feel like, who would we need to evolve into and become, in order to co-create this new world?

Computing Architecture in a Holographic Reality

To better understand the nature of the holographic reality, it can be helpful to know some basic concepts involving computer architecture like hardware, firmware and software. Computer architecture has a set of rules and methods that describe the functionality, organization and implementation of the computer systems, it also defines the capabilities for programming and the design options that are available to the user. A computer system is composed of many parts including the physical hardware, operating system and software applications. The hardware refers to the tangible material components of the computer system, which executes the computer programs that have been installed as software programs, such as a video game interface. The planetary architecture also has a tangible hardware design, with an instruction set that processes all of the data happening within it, and stores all of this accumulated species information into cellular memory that forms into timelines.

If we apply this model to the global brain of earth, as similar to the functions of computer architecture, we could say that the main chip processor that turns on the holographic computer to project the earth’s 3D reality into timelines, is actually the combined quantum energy of our collective soul consciousness. All of us on the earth make up the entirety of the energy processor and the data storage chips of collective consciousness memory that is recorded in the planetary brain. See Computing Architecture.

The structure of our world, the Architecture of creation is in the pattern of our consciousness that is an energy waveform that is having this experience in matter. This happens via a hidden blueprint that is not visibly seen, yet is being expressed through a holographic template. There are Natural Laws governing the substance of all consciousness structures, and there is intelligent energy, order and organization in the way that the Universe is built as a time matrix for consciousness evolution, as well as a spiritual blueprint for instructing human body’s and all living things. The holographic template in which matter comes into manifestation is in standing waves, which hold a fixed point in a grid with specific mathematical and geometric relationships that act as the instruction set for energy waveforms to flash on and off in frequency patterns.

The framework of manifested creation in our Universe starts from within the eternal God Source or the center point of all union, by vibrationally down stepping through itself, contracting the consciousness into a singular point of focus which forms a creational intention. All of creation, from the unmanifest to manifest forms emerge from the consciousness energy of the eternal God Source, and ultimately all of these consciousness forms will return back into the center point of all union, reuniting with the All-One. Thus, the eternal consciousness of the God Source resides within and around all of us, each living being is the original manifestation of the intelligent consciousness units that exist in the entire body of the God Source or All-One. The intelligent consciousness units or the Living God Spirit that is alive in all things is called the Inner Christos, which is built upon the Universal Natural Laws. We can come to understand this through the reverence for all of life, and through philosophies that are described in the Law of One. [1] 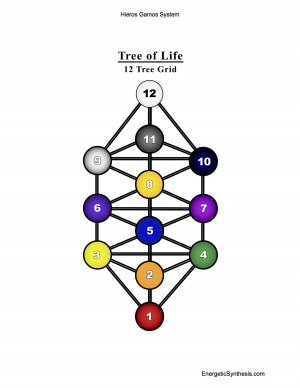 The 12 Tree Grid is the first level of structural organization in the unmanifest layers that functions as the architecture that sets consciousness energy into dimensionalization, it is the core holographic template in which morphogenetic fields are structured. The 12 Tree Grid is the blueprint that sets the ratios of energetic balance within the core manifestation body, and that is set by the intelligent spirit of the Inner Christos, in what is referred to as Krist Code. The Universal 12 Tree Grid is made in the gender principle of outer male Krist coding and inner female Krystallah coding that merge together to form interwoven nested patterns. These patterns create dimensionalization through which consciousness can come into manifestation as an individuated form.

The Krist Code is what resets the core lightbody architecture into the correct mathematical ratios and structural lines of Energetic Balance, and these precise angles control the spin direction and align the entire consciousness body into setting a neutral still point in the Core Manifestation Body. The neutral still point is a creation point in which the God source generates a feedback loop with the individuated spark of light, and this enables a Zero Point return back into all of the individual’s consciousness layers, and this naturally builds the lightbody to house the Inner Christos. The Krist Code arranges correct mathematical proportions in the 12 Tree Grid, the natural function of which is to generate the light-sound spark of Inner Christos, which generates a perpetual energy supply and eternal life expression. This makes it possible for the eternal source supply held within the body of the carrier of living consciousness to be continually maintained with the God Source, exchanged within the center point, throughout all stations of identity travelling through multiple dimensions simultaneously.