When the Sumerian-Egypt Invasion began, this event unplugged human DNA and scrambled the Fire Letters and the geometric codes in the planetary Morphogenetic Fields which blocked Higher Sensory Perception and thus, blocked multidimensional perception of other Timelines and extradimensional races. The Stargate Takeover in Egypt form the Luciferian Rebellion allowed the Annunaki and NAA groups to erase the collective human race memory in the Astral Plane and Soul Matrix layers, of which they created the False Ascension Matrix as an enslavement for repeated human reincarnation for recycling souls. For those with their genetic preference or under Mind Control to serve the NAA on earth, they gave the real Atlantian Cataclysm history and the ability to have Higher Sensory Perception. They gradually infiltrated the ruling monarch classes and bloodlines and collected life force through SRA methods to give to those to remain in Controller power with the NAA program to continue to enslave the asleep, amnesiac humans. 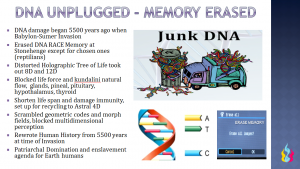 The Babylonian Massacre was a loosh harvesting event that generated the collapse of the planetary magnetic field, scrambling human DNA and generating malfunctions in the human glandular system. At this point of the NAA invasion it blocked the 8th Portal and the 12th Portal of the Planetary Gates, therefore blocking the 8th Chakra and 12th Chakra and related energy centers in both the human body and planetary body. This blocked life force and Kundalini natural flow, blocked all the endocrine system glands, the pineal, pituitary, hypothalamus, thyroid, etc. This severely shortened the human life span and damaged immunity, creating diseases and other mutations.

After the Atlantian flood, these NAA factions set their sights on gaining control over the main stargates in the Middle East, and this began a series of military campaigns to conquer Egyptian civilization which further led to a series of Sumer-Babylon massacres. When the Sumerian-Egypt Invasions began, these events unplugged human DNA and scrambled the fire letters and the geometric codes in the planetary instruction sets which blocked multidimensional perception of other timelines and extradimensional races. See Marduk Omicron.

Between the tragic grid events of the Babylon Massacre and the Djoser Invasion in Saqqara, Egypt, an Artificial Tree of Life was cloned into a sub structure in which this Red Cube Egyptian Pantheon tree was used as the main grid architecture for cloning Christos Founder and Serres-Egyptian identities connected to the Christos identities on Gaia. These assorted AI based red cube cloned identities such as False Ezekiel, False Akhenaton, and False Yeshua are AI holograms used to confuse, divide and conquer humanity by putting the power, control and global wealth into the hands of their invading races of Satanic and luciferian bloodlines so they rise to be the dominant ruling classes.[2]

Through the installation of a succession of Marduk controlled Babylonian Kings in what is present day Iraq, they created an empire that settled around the Middle East for gaining control over the main 2D, 4D and 10D stargates.

Nebuchadnezzar II was the longest reigning king of the Chaldean dynasty in Babylon and was committed to conquest via the destruction of nations in order to rebuild his empire with great opulence and magnificence to honor Marduk. Thus, Babylon was the home of the god Marduk considered to be at the center of the world, and Nebuchadnezzar's devotion to Marduk was meant to be a celebration of Babylonian victory and his supreme greatness.

Ezekiel’s Amethyst Order Father of Dragons Kantarian body became embedded in the Earth as the result of the Electric Wars and Fall of the Gaian Matrix, in which the advanced AI Beast Machinery from the black hole system had infected the 8D Galactic Core. Unable to incarnate into his damaged solar body, his consciousness fragments incarnated into a human Soul body after the Atlantian Cataclysm event which led to several Sumerian-Egyptian invasions and then the Babylon Massacre. Ezekiel incarnated in the Christos Mission timeline to help return the natural DNA languages inherent in the Law of One teachings after Hatshepsut and Akhenaton’s first stages of the Guardian gridwork mission undertaking, but before the timeline of Guardian Yeshua at the height of power of the Babylonian empire.[3]