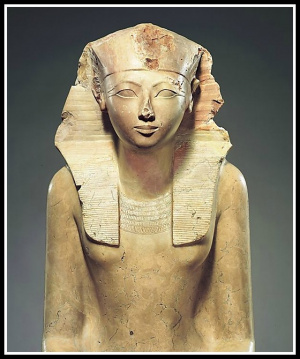 Hatshepsut meaning Foremost of Noble Ladies, (1507–1458 BC) was the fifth pharaoh of the Eighteenth Dynasty of Egypt. Hatshepsut came to the throne of Egypt in 1478 BC. Officially, she ruled jointly with Thutmose III, who had ascended to the throne the previous year as a child of about two years old. Hatshepsut was the chief wife of Thutmose II, Thutmose III’s father. Hatshepsut had been well trained in her duties as the daughter of the pharaoh. During her father's reign she held the powerful office of God's Wife. She had taken a strong role as queen to her husband and was well experienced in the administration of her kingdom by the time she became pharaoh. She is generally regarded by Egyptologists as one of the most successful pharaohs, reigning longer than any other woman of an indigenous Egyptian dynasty. According to Egyptologist James Henry Breasted she is also known as "the first great woman in history of whom we are informed." Hatshepsut was the daughter of Thutmose I and his primary wife Ahmes. Her husband Thutmose II was the son of Thutmose I and a secondary wife named Mutnofret, who carried the title King's daughter and was probably a child of Ahmose I. Hatshepsut and Thutmose II had a daughter named Neferure. Thutmose II fathered Thutmose III with Iset, a secondary wife. Hatshepsut established the trade networks that had been disrupted during the Hyksos occupation of Egypt during the Second Intermediate Period, thereby building the wealth of the eighteenth dynasty.

Hatshepsut was one of the most prolific builders in ancient Egypt, commissioning hundreds of construction projects throughout both Upper Egypt and Lower Egypt. Arguably, her buildings were grander and more numerous than those of any of her Middle Kingdom predecessors'. Later pharaohs attempted to claim some of her projects as theirs. She employed the great architect Ineni, who also had worked for her father, her husband, and for the royal steward Senemut. Following the tradition of most pharaohs, Hatshepsut had monuments constructed at the Temple of Karnak.

The Temple of Pakhet was built by Hatshepsut at Beni Hasan in the Minya Governorate south of Al Minya. The name, Pakhet, was a synthesis that occurred by combining Bast and Sekhmet, who were similar lioness war goddesses, in an area that bordered the north and south division of their cults. The temple is thought to have been built alongside much more ancient ones that have not survived. This temple has an architrave with a long dedicatory text bearing Hatshepsut's famous denunciation of the Hyksos. They had occupied Egypt and cast it into a cultural decline that persisted until a revival brought about by her policies and innovations. This temple was altered later and some of its inside decorations were usurped by Seti I, in the nineteenth dynasty, attempting to have his name replace that of Hatshepsut.

In comparison with other female pharaohs, Hatshepsut's reign was much longer and more prosperous. She was successful in warfare early in her reign, but generally is considered to be a pharaoh who inaugurated a long peaceful era. She re-established international trading relationships lost during a foreign occupation and brought great wealth to Egypt. That wealth enabled Hatshepsut to initiate building projects that raised the calibre of Ancient Egyptian architecture to a standard, comparable to classical architecture, that would not be rivaled by any other culture for a thousand years. She managed to rule for about 20 years. [1]

The Mortuary Temple of Hatshepsut, also known as the Djeser-Djeseru (Ancient Egyptian: ḏsr ḏsrw "Holy of Holies"), is a mortuary temple of Ancient Egypt located in Upper Egypt. Built for the Eighteenth Dynasty pharaoh Hatshepsut, it is located beneath the cliffs at Deir el-Bahari on the west bank of the Nile near the Valley of the Kings. This mortuary temple is dedicated to Amun and Hatshepsut and is situated next to the mortuary temple of Mentuhotep II, which served both as an inspiration and later, a quarry. It is considered one of the "incomparable monuments of ancient Egypt."

The Polish Academy of Sciences in Warsaw is responsible for the study and restoration of the three levels of the temple. As of early 1995, the first two levels were almost complete, and the top level was still under reconstruction. [2]

Trinity Gates are required to be plugged into other gates in order to work effectively, such as what we refer to as Mother Arc Gates or Ark Covenant gates. They run off the Mother Arc Gates portal between planet earth and the Andromeda galaxy. To work with the Mother Arc gates and proficiently help to plug them into the Trinity Gates, 12 DNA strand activation of Diamond Sun is needed.

As the result of the recent escalation of AI Timeline Wars, the Guardian Christos Mission has reached the stage of dismantling sections of the actual phantom matrix infrastructure, the actual artificial intelligence architecture put into place through the insertion of the Artificial Tree of Life. The phantom matrix uses four main black pillars in reversal architecture to power up their artificial creations, based upon holographic inserts made of the four main Grual Point Christos Mission Guardians and their respective timelines. We have generated a graphic aid to help assist in the visualization of the concept of artificial timelines projecting from the phantom matrix, which describes the AI Timeline Wars. Please take note that this is not intended to be a literal representation; it is a visualization intended to help the mind grasp the blended reality system of organic timelines and artificial timelines that we experience at this time on the earth.

Hatshepsut’s mission in spiral time was embodiment of the 2D Grail, protector of Rod and Staff Mother codes, and to utilize Arc technology to build the first stages of gateway portals to be used as the Mother Arc Zone. Her genetics and timeline were cloned for Dark Mother archetypes and used in the Essene Divide artificial matrix for use to invert the Christos Mission, and to be used as psychological weapons by imposters to divide and conquer the Blue Flame Essene groups.

The Hatshepsut monadic family has direct genetic lines to Yeshua 12 DNA, from a history on the planet Venus. This appears to signify that the Hatshepsut family is the matriarch of the Christos blood lines on earth that were regenerated on Venus, after the Taran and Tiamat explosion, and their collaborative mission was to bring this Blue Flame embodiment template to the earth to help repair the silicate matrix and core manifestation body. This bloodline history is in a war of disinformation based on NAA control, as it has links to the source of RH negative lines on the earth. Those lines that were usurped by Luciferian, Annunaki Fallen Angelic hybrids that genetically modified RH negative into human hybrid bodies, and then modified the bloodline into Ruby Sun DNA digressive templates. This history on Venus with the Christos Mission has been pointed out as related to A negative and AB negative more recently coming to incarnate on the earth. To track these in particular events related to hijack of bloodlines through hybrid clones and tracing how this phenomenon is related to the NAA’s cloning and galactic human trafficking schemes.[3]

The return of Christos Mission representatives hierogamic union through corrections in the Cosmic Clock have recently reunited Akhenaton and Kiya, Hatshepsut and Ezekiel family of consciousness streams from the Earth-Tara-Gaia histories connected to original Krystallah Suns.

Akhenaton and Kiya seem to have embodied the Krystic solar overriding forms for the Egyptian pantheon genetic tree used in AI cube systems and their red wave identity clones, and this acts as the repelling force of the Red Cube false identities of 7D inversions of Isis-Osiris Cloned Hierarchies that were bonded in Saturn-Moon matrix. This inverted 7D based unholy union was generated from Saturn-Moon blood worship rituals, and was instrumental in powering up many of the antichrist obelisk pillars used for marking cardinal directions in the Artificial Tree AI timelines and Thothian Leviathan Anti-hierogamic Rod and Staff Trident architecture, which are impaled across the globe in the ley lines.[4]