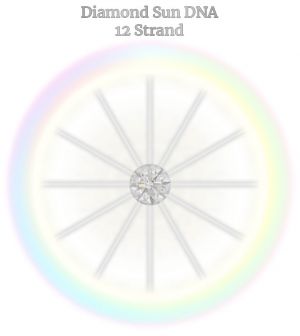 All incarnating angelic humans have a unique individual expression that is held within morphogenetic instruction sets that express the specific physical attributes that the consciousness chooses to manifest as its specific characteristics in form. The multidimensional blueprint which consciousness utilizes to experience individuated consciousness within a dimensionalized form or biology is the Crystal Body. The Crystal Body is critical in setting the electromagnetic spirals and foundation structure for the unique design and attributes of the individual’s DNA. The Crystal Body generates the instruction set for the entire biological energetic system through DNA, setting up the lightbody configuration which functions as the pre-matter construction for the shape of the actual matter form.

The Crystal Body is connected within the permanent seed atom of the higher heart center, and is wholly responsible for building the consciousness structure that holds the Soul, Monadic and higher spiritual bodies, by running the energetic circuitry that forms into merkaba spirals which further build into the complex webbing of the entire nadis structure. The nadis structure is essentially the entirety of the complex circuitry forming into the multidimensional layers of the central nervous system, which functions as the conduit for consciousness energy and Light Symbol Codes. Therefore, it is the central nervous system or Bio-Neurology which is required to function correctly in order to run the soul, monadic and higher spiritual frequencies of light and sound throughout the Brain, nervous system and body. The Crystal Body functions as the multidimensional structure that interconnects consciousness energy and biology, it builds the necessary energy structures for the light and sound bodies to link with all of the higher spiritual bodies from within the physical form.

The Crystal Body remains mostly dormant in humans until consciousness growth stages of heart opening actually occur in the 8th Chakra center during the monadic integration phase. In the dormant phase, an individual’s DNA remains spiritually stagnant and is therefore largely being shaped through epigenetic exposures or environmental factors. In many cases, the negative ego programs of over mentalized intellectualization directly block communication exchanges from the heart center into the Crystal Body. Hence the aggressive trauma-based mind control targeting used by the Controllers as the main spiritual warfare tactic to keep humanity in fear for the purpose of shutting down their higher heart center, which tends to result as inactivity within the Crystal Body.

Activation of the Crystal Body starts with opening our heart center towards feeling and experiencing more loving kindness, compassion and empathy for ourselves and others, which naturally occurs during the first stages of spiritual awakening. After the heart center is able to feel and express unconditional love, the next stages of Crystal Body activation come from assorted ascension wave transmissions from the Sun or stellar bodies into the planetary grid, which include a variety of light symbol codes. The individual’s Crystal Body is interlinked with the entire Tribal Shield, which includes the Crystal Body blueprint for all of the variations of specific frequency arrangements for the 12 Tribes of the angelic human template. As a result of the plasma initiations and magnetic reset, the activation of the larger Crystal Body for the Tribal Shield memories and the Diamond Sun DNA information is methodically clearing and removing alien hybrid genetic codes, AI codes and an assortment of blood covenants that were used as consciousness traps. These genetic distortions in the personal DNA code must be cleared in order to generate the DNA signal handshake through each of the dimensional planes that are holding the Crystal Body matrix instruction set for the entire Tribal Shield DNA coding.

With the Summer Solstice, we are in an ascension wave in which solar plasma frequencies are being saturated through the planetary grid network to assist in monadic matrix integration for Crystal Body activation, which further leads to an acceleration in DNA assembly. This is the generation of hierogamic crystalline blueprints in the individual Crystal Body that further activate the crystal gene in the silicate matrix which then catalyzes a range of bio-spiritual plasmas.

The acute phase of correcting magnetic realignment via reconnection with Crystal Body instruction sets is occurring within the window of the Solar Eclipse of June 10th through the March Equinox in 2022. If these physical symptoms are not present now, they may arise in the next nine months for the consciousness rebirthing necessary for preparing to navigate the planetary liberation and ascension timeline in 2022 and beyond.

The instruction set for the Diamond Sun DNA is held within the Crystal Body which must be activated through the opening heart center. As a result of NAA invasion and genetic mutations, very few humans on Earth held the entire silicate matrix instruction set in their DNA. Many distortions were being caused by the lunar matrix, artificial magnetic fields and assorted implants of alien machinery which generated damage in the Crystal Body. However, this is now changing during the planetary ascension stages of restoration of the solar feminine principle, as the organic magnetism resets and allows the Holy Mother lineages to generate the correct sound body imprints for the magnetic particle base, including corrections to upgrade the Mitochondria and chromosomes.

Those that open their higher hearts during Monadic integration with unconditional love, Compassion and Empathy, desiring to spiritually evolve will connect with their Crystal Body. The Crystal Body is being upgraded through the return of the Emerald Order, and thus will finally be able to transmit the necessary DNA seed codes to reassemble and activate a range of the Diamond Sun DNA templates and plasma lightbody codes in humanity.[1]

The human energy field contains our Lightbody instruction set which houses our Crystal Body for the inner Christos-Sophia dwelling and that holds the resonate energy signature of the different light and sound cells in our unique personal Blueprint. As with the mechanics of creation, the crystal body exists in Gender Principle, the masculine layer holds the light imprint for all of our Flame Access Points, while the feminine layer holds the sound imprint which holds all the possibility for the tonal layers. When the inner and outer masculine and feminine energy aspects in our consciousness become one and unified together, the crystal body aspects of light and sound recreate their pattern in the Lightbody to reflect the same unity between the light and sound imprints held within the crystal body. When the Crystal Body light and sound layers unify into one body, this stage of Lightbody development opens up the possibility to generate different sound light emanations into liquid light Plasma Waves. This is the generation of hierogamic crystalline blueprints in the crystal body that further activate the Crystal Gene in the Silicate Matrix which then catalyzes a range of Bio-Spiritual Plasmas.[2]

The result of the ongoing Emerald Order reclamation seems to be the causal factor behind witnessing the recent Emerald Crystal Body Activation of the Solar System, this event interconnected the eleven planets and Sun with the Emerald Crystal Heart matrices by connecting them directly with the Emerald Order stationed in the Cosmic Founder Domains. This aligned the planetary bodies in the Solar System to become synchronized within the complex chromatic formations of Rainbow Dragon King coding, which allowed for an assortment of colored Solar Dragons to enter our Universal Time Matrix for the first time.[3]