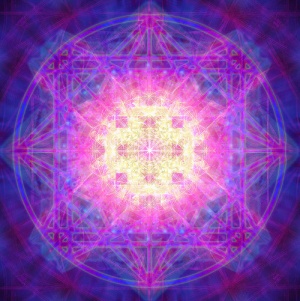 The All Seeing Eye of God projects its Divine Mind blueprint as an imprinted Geometric Tesseract called the Cosmic Cube Matrix. It is the schematic being projected into the brains and bodies of the Blue Ray's at this time, those with the "mark of the lamb" on their foreheads as created by the opening of the seal.

This imprint of a Geometric Tesseract is being referred to as the Cosmic Cube Matrix of God's archetypal matrix of the 144,000. The Cosmic Cube holds the schematic and blueprint to God's Laws by building the architecture of the City Four Square or Krystal Cathedral. This represents the Four planes of matter in the Four quadrants of our Universe. This is also representing the four elemental bases of our raw material making up the planes of matter (Air, Fire, Water, Earth). These four elementals make up the main chemical constituents of our DNA code and are being re-encrypted by the Aurora's through the Crystal River. The City Four Square or Krystal Cathedral contains the blueprint of the Solar Christ identity of the 144,000 archetypes of the sons and daughters of God. This new life foundation, which is the new grid for building base matter in the blueprint as designed by the 144,000, is necessary in order to focus the Divine Wholeness of God consciousness in the given dispensation of the Ascension. The City Four Square or Krystal Cathedral is where the Crystal River Flows and is represented as the Golden City archetype that returns God's Natural Laws back to this creation. Its projection is to be held as embodied by the divine messengers, such as described in prophecy as those with the seal of the lamb on their foreheads, containing the schematic of the Cosmic Cube 144 Matrix.[1]

Ultimately the tetrahedron structure forms the base of the Geometric Tesseract which is the Cosmic Cube Matrix of God’s 144,000, which is the architecture held by the Oraphim for City Four Square or Krystal Cathedral. The Founder Guardian Oraphim are the Keepers and protectors of the City Four Square schematic in its geometric Tesseract design transmitted by the Cosmic Cube Matrix. These are the Omniversal Time Code Keepers that we are capable to interact and communicate within this dimension of the earth timelines during the Trans-time continuum opening.

Transcript - For years the Guardian Host have been showing me optical lenses which refract the light source into the holographic projector of the consciousness blueprint fields. It was shown how intermediary lenses, also referred to as eyes, are used in Mind Control systems to manipulate the patterns of refracted light in the 3D reality in order to create distorted holograms. The Negative Aliens technology created many of these artificial intelligence “eyes” that operate as the optical lenses of the False Father gods, such as Yahweh. These alien networks run bi-wave and reversal current into the planetary body and planetary mind in order to siphon energy into their artificial systems. In 2010 the Krystal Star family with the 144,000 seal in their 3rd Eye began to witness the schematic of the Divine Mind of God blueprint imprinted upon the center of our brain. The actual living and eternal Divine Plan of God through the Holy Father's Laws is being projected as a geometric schematic which contains the instruction sets of the divine will blueprint as perceived through its All Seeing Eye. Unfortunately, the All Seeing Eye symbol has been hijacked in the past through the many uses of its symbolism in black magic rituals carried out for satanic or luciferian purposes. Which can be observed as the symbolism used in black magic to gain control over the economic and financial system, as well as the entire global money supply.

The Eternal Eye of God instruction set has been placed in the field through our physical, embodied person, and our mission is to ensure that we hold this 144 cell schematic for the energetic balance of the planet. When the schematic is being released for transmission into the field, it is similar that the body is acting as a transformer for the frequency current, stepping down and stepping up the variation of frequencies as they are being run throughout one's internal circuitry. The Divine Will from the Mind of God Blueprint has been placed in the 33rd parallel north latitude coordinate for access all over the globe. The 33rd parallel north is a circle of latitude that is 33 degrees north of the Earth's equatorial plane. It crosses Africa, Asia, the Pacific Ocean, North America and the Atlantic Ocean.

This begins another stage of the process which planetary guardian gridworkers are able to access the geometries required to create diamond sun networks of trinitized forms, that support the building of Triad Communication Stations throughout the globe. This is required to change the bi-wave energy system to the tri-wave energy system, which in effect is moving from a closed energy system into an open source network.

The installation of Triad Communication Stations and Krystal Star networks are designed to replace Reversal Networks that have been collecting Loosh from the earth inhabitants, and to work with the Krystal Star organic technology to open spiritual links to communicate directly with Krystal Star and Aurora Guardians throughout the many timelines. This began as a focused Planetary Grid Network repair project to install Krystal Star hosting and communication networks in December 2012, during the change of planetary hosting. [2]